For the past week, I have taken a little time to organize the transfer window for the Dayton Flyers and talk with some folks about the team.  As of right now, Dayton has three scholarships open for the 2020-2021.  With this article, I’m going to just give a brief update on what the team looks like as of now, the open scholarships available, transfer interests, and recruits.  Let’s get down to the nitty-gritty.

A Look At The Current Team

Dayton is losing three key contributors off of the 3rd best team in the country from a season ago.  This stinks, but that’s the reality with college basketball.  The Flyers are technically bringing back two starters in Rodney Chapman and Jalen Crutcher.  Ibi Watson was the first guy off the bench last season and is 99.9999% going to be moved up into the starting lineup for next season.

With that, there seems to be two starting spots open that are up for grabs.  Among those gunning for those starting roles from last season are Jordy Tshimanga, Dwayne Cohill, Moulaye Sissoko, and Zimife Nwokeji.  You could argue that Jordy Tshimanga is going to be moved up into the starting lineup as well, but that also does not seem to be certain as it was often hard for him to see the floor last season due to playing behind Obi Toppin, but also due to some foul or match-up problems.  You could also see Grant decide to go heavy with guard play with Cohill starting alongside Crutcher and Chapman.  Cohill had an up and down season, but showed great improvements to his game on offense and at the free throw line at the season went on.  He is already an elite defender, so no worries there.  Cohill needs a big summer of offensive improvements to be put into the starters roll as a third guard.

Now, there is a chance that the team could go with either of the two freshmen that redshirted last season.  Moulaye Sissoko is the first name that jumps off the page due to being the only other true center besides Tshimanga.  We really do not know where he is at with no playing experience, so I expect this spot to be Jordy’s to lose.  There is also the unknown of Zimi Nwokeji, a 6-7 combo player who transferred to Dayton from prep school after decommitting from Florida State.  There is a lot of hype on this guy, considering he was going to be a player at a big time program in FSU.  Nwokeji is a promising player, but I would not expect him to start either due to no college playing experience yet.  One thing to expect is for these guys to play key roles off the bench considering they have had time practicing with the team.

As far their recruiting class goes, Dayton has 3 guys coming into next season.  Those players are, listed along with their position, are PG Lukas Frazier, SG Koby Brea, and SG RJ Blakney.  All of these guys are three-star recruits, even though I personally don’t think that matters at all (Obi was 1 star).  The one thing I have noticed is that they are all lengthy, athletic guards.  Any one of them can come into next season and compete for minutes, most likely off the bench.  However, expect Coach Grant to redshirt at least one of them since that has been the common theme for the past two seasons under him.  The most likely candidate to wear the red shirt is Brea, who is a very young senior at only 17 years old.  That doesn’t necessarily mean he will redshirt, but reports say that this is likely the case.  We won’t know for sure until these freshmen get to campus next season and show the coaches what they got.

Well, that’s the team so far.  Coach Grant has three open scholarships to work with, so let’s get more into that.

Now, with these three open scholarships, Dayton could go a variety of ways.  This is kind of a lot of open scholarships for Dayton considering they already have a big freshman class coming in next season.  One way they could go is the transfer market.  This is the biggest reason why Anthony Grant was able to build such a deep team last season with the acquisition of 4 transfers two seasons ago.  Below is the Dayton transfer interest tracker that I made.  Now, this chart is only to organize all the different twitter insider reports of who Dayton has made a phone call to.  The amount of interest that Grant actually put into these guys is unknown.  He could have just made a crank-call for all we know.  You don’t really know what these reports mean other than Grant called them.  If you want to see an updated chart in the future, follow me on twitter @Not_PrivatePyle. 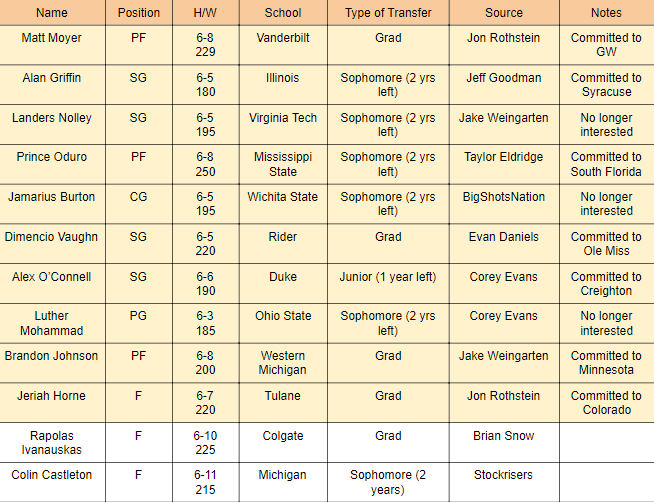 Now, this doesn’t look too good at first glance.  Grant has not been able to get one transfer.  However, we are only a few weeks into the off season.  There are more players entering the transfer portal every day.  It is also very difficult for players to know what Dayton is about without touring campus or Grant pulling out all the stops at the arena.  If you couldn’t tell already, many recruits are choosing Power 5/6 conference programs.  My guess is that this is due to conference affiliation and name brands.  Not saying Dayton is not a name brand, but it is going to be really hard to pick a program from the A-10 without actually going to see what the program is about.

My one piece of advice is do not freak out about not getting transfers.  On a normal year, Grant probably gets someone by now.  Coaches have to resort to just phone calls and video chats right now.  A lot of the recruiting is done by the player looking things up on their own and going by close recommendations on schools.  Recruiting is a world of rejection.  You will get more no’s than yes’s.  At the end of the day, a program like Dayton will be just fine.

Grant could use one of these open scholarships on a high school senior who has yet to make a college choice.  Let’s go over a few of these guys whom Dayton has offered.

Mo Njie — Njie is a 6-9 PF/C from Centerville, OH, which is right in Dayton’s backyard.  Rivals lists Dayton, Xavier, Toledo, Providence, VCU, and Illinois State as the main programs who are trying to attract him.  He posted on twitter back in mid-March that he was going to decide in the coming weeks, so this is one recruit that I believe Grant has a good chance to land.  Rivals even lists the Flyers as the most likely landing spot for Njie.  We shall wait and see.

Madior Seye — Seye is a 7 foot Center from Senegal, but he is playing his high school ball in Pennsylvania.  There is not a rivals profile for him, but Verbal Commits has him on Dayton’s radar with offers from the Flyers and Monmouth.  There is very little on him, but he is worth keeping an eye on with the lack of big men on the team.

Andersson Garcia — Garcia is a 6-5 SF from the Dominican Republic, but he is playing his high school ball in Tennessee.  He has many offers from schools all over, but some main names are Mississippi State, Kansas State, Dayton, and ETSU.  All signs point to Mississippi State being the favorite.

Desmond Polk — Polk is a 6-3 SG from Wisconsin and plays for a premier high school in La Lumiere School.  He has other offers from DePaul, Iowa, Bradley, and Georgia Tech. Due to Dayton being very guard heavy, it is with considerable doubt that Polk would consider the Flyers.

Stay tuned for Part 2 when more things start to happen with the Flyers over the course of the off-season, especially when any of the three scholarships get filled and the schedule comes out.