Way back in January, I wrote that Dayton seemed to be figuring out who they should be on the court. Dayton had just beaten Rhode Island 67-56 and it didn’t even seem that close. Since that time, Dayton has gone 3-4 and traded wins over Saint Louis and St. Bonaventure with confusing losses to a moribund St. Joe’s and that same Rhode Island team in a game Dayton led by 18 with less than ten minutes left. Saying that you know what you’ll get from this Dayton team on any one night is like saying you know how WandaVision will turn out; you’re lying, we know you’re lying, please stop lying.

Good Dayton (TM) showed up today and marched on to the A10 Tournament quarterfinals with an 84-72 win over Rhode Island in this season’s rubber match between the two squads. Dayton was paced by 25 points from Ibi Watson, who shot 9-17 from the field and 6-11 from distance. The Flyers as a team shot 12-23 from deep, which yeah, that’ll do.

Dayton decided to turn in its best offensive performance of the season at an opportune time. The Flyers got 1.31 points per possession (!) against a fairly respectable Rams defense. Rhode Island came in with the 93rd defensive efficiency nationally speaking. Dayton said you strike me as more of 120ish team. Let’s correct that. 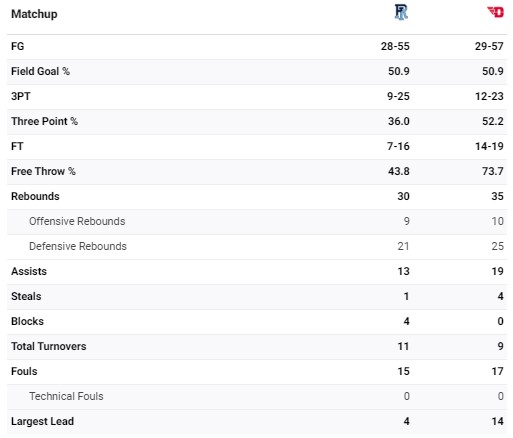 As noted above, Ibi Watson was flames today. Watson netted a season-high 25 points and was extremely efficient in doing so with an effective FG% of 70.6%. Ibi couldn’t have been more efficient if you had installed a conveyor belt on him.

Dayton got 39 points on 13-22 shooting from its four freshmen R.J. Blakney, Mustapha Amzil, Zimi Nwokeji, and Koby Brea. The Flyers have seen quality production from the youngins in spots this season but never at nearly this level in a single game. Not only does this sort of production lighten the Atlas load that Jalen Crutcher and Ibi Watson are carrying, it unlocks a lot of motion for Dayton that has been missing this season. All four freshmen are long, active athletes that can score at multiple levels and stretch the floor on the offensive end, opening up possibilities that felt constricted for much of the season.

While there was a lot of good, this team still lacks a reliable primary ball handler and it once again showed at points today. Dayton will need to find ways to overcome that against quality, high-pressure defensive teams such as, oh say, VCU tomorrow.

Fatts played nearly identical minutes per game against Dayton as he did everyone else in his career (actually one minute more vs. Dayton, to be exact). That’s where the good news ends. Russell’s stats are almost universally worse across the board, from two- and three-point field goal percentage to free throw percentage (I’m willing to chalk this up to randomness) and even field goal attempts. Fatts has never been a terribly efficient scorer to begin with but he has been uniformly worse against Dayton. His attempts were not significantly down from his career average; that said, Russell was 4-5 against Dayton in his career, and 2-5 in his final three seasons. I’m a bit surprised he didn’t force action a bit more being that his team was typically down. That’s odd, knowing what we know about Fatts Russell.

Allen Betrand went down in the second half with an apparent knee injury. Betrand has had an up and down first season for the Rams and seemed to fall out of the rotation a bit as the season wore on. However, he was one of the better players on the floor on both ends today and showed why Rhody fans were excited for his transfer into Kingston. We will have to await word on the severity of the injury, but a serious one would likely remove a piece from David Cox’s arsenal for at least part of 2021-22.

Speaking of David Cox… where do we start? This team was an absolute mess. Most nights it felt like the players had just met each other in the parking lot. COVID caveats apply. It was a weird year for everyone. But between the barrage of outgoing transfers and lack of on-court results, I think the Rhode Island administration will have to take a long, hard look at where this program is going if there aren’t marked improvements by the end of 2021-22.

Dayton plays VCU at 3:30 EST tomorrow in VCU’s cafeteria/gymnasium/senior center. (Bring your own yoga mat!) Dayton has struck out twice against VCU this season and has not looked terribly competitive in doing so. VCU is designed to frustrate a lot of what Dayton likes to do offensively, switching on screens and extending on-ball defense past the three-point line to put a hitch in the Crutcher/Watson show. But this is March and there are no excuses. Win or go home.