Even the greediest of greedy Dayton fans could not find much to complain about in the 2019-20 season. The Flyers are sitting at 26-2 overall, undefeated in conference play with only three to play, and virtually assured of a protected seed come Selection Sunday. It’s largely been nights of wine and roses, and yet…

We get greedy. We are merely human and never fully sated. Dayton fans want to know what lies beyond the horizon. One of the tallest mountains that a contender from a non-P6 conference can climb is earning a #1 seed in the NCAA Tournament. Can Dayton join the hallowed halls?

Let’s preface this by saying that #1 seeds hailing from outside the major conferences are exceedingly rare. Going back to the tournament’s expansion to 64 teams in 1985, 13 #1 seeds have come from a mid-major conference. That’s less than 10% of the 140 total #1 seeds over that 35-year period. 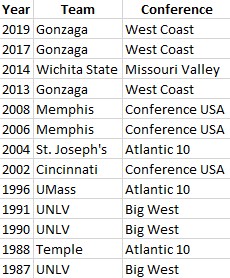 Ah. Right then. Not promising from the get-go. The reason for this should be fairly obvious: teams from mid-major conferences have a much thinner margin for error than those from major conferences. The #1 seeds above averaged 1.7 total losses on the season and 0.7 conference losses including conference tourneys. You don’t have to be perfect but you better be damn near perfect.

So we’re operating under the assumption that this will require the Flyers winning out the regular season and the A-10 tourney. Winning out puts you at 32-2 overall, 21-0 in A-10 play, and likely holding strong at your current NET ranking position of 4, give or take.

Dayton is likely scrapping for one of two available top seeds. Kansas and Baylor should have a #1 locked down barring a Britney-meets-Federline meltdown in the final weeks.

So who are the contenders? We’ll look at each based on a few stated NCAA Tournament selection committee metrics, including NET ranking, performance within the quadrants, strength of schedule, and wins over bubble-quality teams. We don’t know what the committee considers bubble quality so we’re relying on Bart Torvik. This is all overly simplified and doesn’t take into account the whims of cranky old men late for Sunday pot roast dinner but it’ll do for now.

Dayton’s biggest asset is its lack of liabilities. (Accountant joke!) They’ve managed to avoid bad losses but also don’t have any marquee wins. Their best win is over #32 St. Mary’s on a neutral floor. If anything their most noteworthy performance might be the overtime loss to #1 Kansas in Maui. It’s nice to have no major arguments against your resume, but it’s also a small problem when you don’t have major arguments for your resume. Dayton has an opportunity for another Q1 win at #42 Rhode Island this upcoming Wednesday but even that isn’t the sort of win to propel anyone up a seed line.

Once again, no bad losses. The difference here is a few marquee wins over #7 Arizona in a true road game, #14 BYU, and #20 Oregon. Dayton doesn’t have an opportunity to match those wins and would likely leave Dayton squarely behind Gonzaga, all things being equal. St. Mary’s nudging up to #30 from #32 would also give the Zags another regular season Q1 win opportunity.

One of the main reasons we’re even having this discussion is San Diego State’s first loss of the season, which happened to be a bad home loss to #111 UNLV. But that 4-0 in Quad 1 should make up for one bad night given that it includes a road win at #14 BYU and a neutral court win over #8 Creighton. Tack on wins over #28 Iowa and at #35 Utah State and that UNLV loss looks more like a stumble than a fall. The Mountain West conference schedule isn’t quite the sinkhole that everyone seems to think it is. San Diego State also needs to win out but should probably be considered ahead of Dayton in this race.

BOOOOOO! Ahem. Not the prettiest resume on its face right there. There’s that home loss to #82 Stephen F. Austin as well as a combined 10-4 Q1 & Q2 record. But the good wins are GOOD. A neutral win over #1 Kansas, a true road victory at #13 Michigan State, and a home win over #9 Florida State. A down year in the ACC caps their opportunities for needle-moving wins in the conference tourney. Only another win over Florida State would make a committee member sit up and take notice at this point. You have to wonder how this resume would look without that stunner at the hands of Stone Cold Stephen F. Austin. I know I, for one, will be kept up at night by this sad story.

You’re looking at the table above and you’re saying “why are we even talking about this?” It’s the Wins Above Bubble. Florida State has the fourth-best WAB number in the country according to Bart Torvik, right behind Kansas, Baylor, and Gonzaga. The Seminoles have also managed to avoid bad losses. They’ll have another couple bubble-worthy wins available to them (at Notre Dame, for example). An undefeated run through the ACC tournament with a win over Duke and/or Louisville could (maybe even should) leapfrog the Seminoles over Dayton.

I got bored and skipped to the bottom

I understand, dear reader. TLDR: the Flyers are probably squarely behind Gonzaga and San Diego State in the race for a 1 seed, have the ever-so-slight edge on Duke and Florida State, and shouldn’t worry much about the others on the periphery (hey Maryland). So the good news is the Flyers are in absolutely in the mix even without an opportunity to score a major win the rest of the way. They need help, but don’t we all man? **looks off wistfully**

The question of whether Dayton even wants a #1 seed is a valid one. This is a common refrain from Dayton super-Twittererer Tom Eggemeier and it’s a compelling argument. The geographical setup of the regions could lay out perfectly for a Dayton team as the top #2 seed. A road to the Final Four that goes through Cleveland and Indianapolis sounds preferable to one involving Los Angeles or New York.

The fact that the Flyers have even put themselves in this conversation is a testament to Anthony Grant and his team. As noted above, a #1 seed from a mid-major conference is a relatively rare accomplishment. The committee is loath to acknowledge great seasons from mid-major conferences unless an overwhelming case is presented. The Flyers may not have the flashiest resume come Selection Sunday, but having no truly bad days might just be enough.