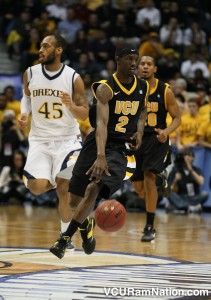 Jon Rothstein of CBS Sports had some kind words to say about two A10 players he listed in his “10 Least Appreciated Players In College Basketball”. He had this to say about the two:

THE SKINNY: Like a predator in search of his prey, Weber is nothing short of relentless each time he guards an opposing floor general. Blessed with boundless energy and a daily desire to get better, Weber has quickly become one of the better defensive guards in the country. He’ll play more point guard as a sophomore for VCU, who should again be formidable under Shaka Smart.

THE SKINNY: The Bulldogs are much better suited to make the jump to the Atlantic 10 with this guy in their starting lineup. With brute strength and burgeoning point forward skills, Jones showed flashes of brilliance as a freshman, accumulating four double-doubles during the course of Butler’s season. Expect that number to at least double in 12-13.

Click here for the full story at CBS New York.