Instead of playing at home again in the Reilly Center, where St. Bona has yet to lose this season, the Bonnies will head to Charlotte, NC to play Davidson on Wednesday evening.

Tip-off from Belk Arena will take place at 5 pm on ESPN Plus.

Before taking an in-depth look at Davidson, let’s take a look at where the Bonnies stand in relation to the conference and with the NCAA Tournament.

The Bonnies have had a terrific season during these unprecedented times. They currently find themselves atop the Atlantic 10 standings.

Our A10 Talk staff even voted the Bonnies as the best team in the conference in this week’s power rankings:

At this point, St. Bonaventure has three games left in the regular season: Wednesday at Davidson, Friday versus George Washington, and then next Monday versus Dayton. If the Bonnies win these three to close out the season, then the Brown and White will head to Richmond as the Atlantic 10 Regular Season Champion. The last time Bona did that was in 2016, the year of the “snub.” Of course, the Bonnies shared that regular-season title with Dayton and VCU, and due to tiebreakers, Bona went to Brooklyn as the three seed and subsequently lost to Davidson in the quarterfinals.

For Bona to not face another “snub” from the NCAA Tournament Committee in 2021, the Bonnies must win these next three games.

Our friend @SBUnfurled has brilliantly put together graphs and charts in relation to St. Bonaventure’s NCAA Tournament hopes.

Games within 5 spots of a cut line:
VCU
at Davidson
Davidson
Dayton pic.twitter.com/rI7jXp1Z8Q

In the chart above, @SBUnfurled beautifully lays out St. Bonaventure’s overall season resume. As one can see, Wednesday’s game in Charlotte is massive, as a Bona win will improve St. Bonaventure’s tournament chances by 20%!

Meanwhile, losing to George Washington or Dayton at home would prove catastrophic.

As of right now, the Bonnies appear in roughly 70% of online brackets, according to @SBUnfurled and @BracketProject. A victory Wednesday over Davidson would vault the Bonnies farther away from the cut line and closer to the Big Dance in Indianapolis.

Davidson has had a solid season, but the Wildcats have suffered some gut-wrenching losses. If not for the narrow losses against Providence and Texas earlier in the season, then perhaps Davidson would find themselves near the NCAA Tournament bubble.

The Wildcats also had a month-long layoff due to Covid-19, so they have played only nine conference games to this point.

Nonetheless, Davidson has owned the Bonnies over the past few years. The Wildcats have defeated the Bonnies seven times since 2015.

In fact, St. Bonaventure has only won at Davidson once: on February 4, 2015, when Marcus Posley hit the game-winning shot at the buzzer.

Davidson ranks 21st in the country in offensive efficiency, according to KenPom. The Wildcats have three players who average in double-digits while nine guys average 12 or more minutes per game.

Yet, their offense flows through the paint, as St. Bonaventure Head Coach Mark Schmidt pointed out: “A lot of times, people get caught up in [Davidson’s] three-point shooting, but they are a team that tries to get the ball into the paint, by the dribble or the pass.”

Davidson’s presence in the paint clearly opens up the scoring for the Wildcat backcourt.

At this point, the Davidson backcourt has combined to average 43.7 points per game (PPG). Senior Kellan Grady leads the team in scoring at 17.9 PPG; Sophomore Hyunjung Lee chips in by scoring 13.6 PPG; and Carter Collins averages 12.2 PPG. This trio has accounted for 117 three-pointers, which is 70% of the total number of threes that Davidson has made this season.

Luka Brajkovic, the 6’10” Forward from Austria, adds 9.9 PPG as the big man can score inside and from downtown.

Kellan Grady, now a Senior, has killed the Bonnies throughout his career at Davidson. 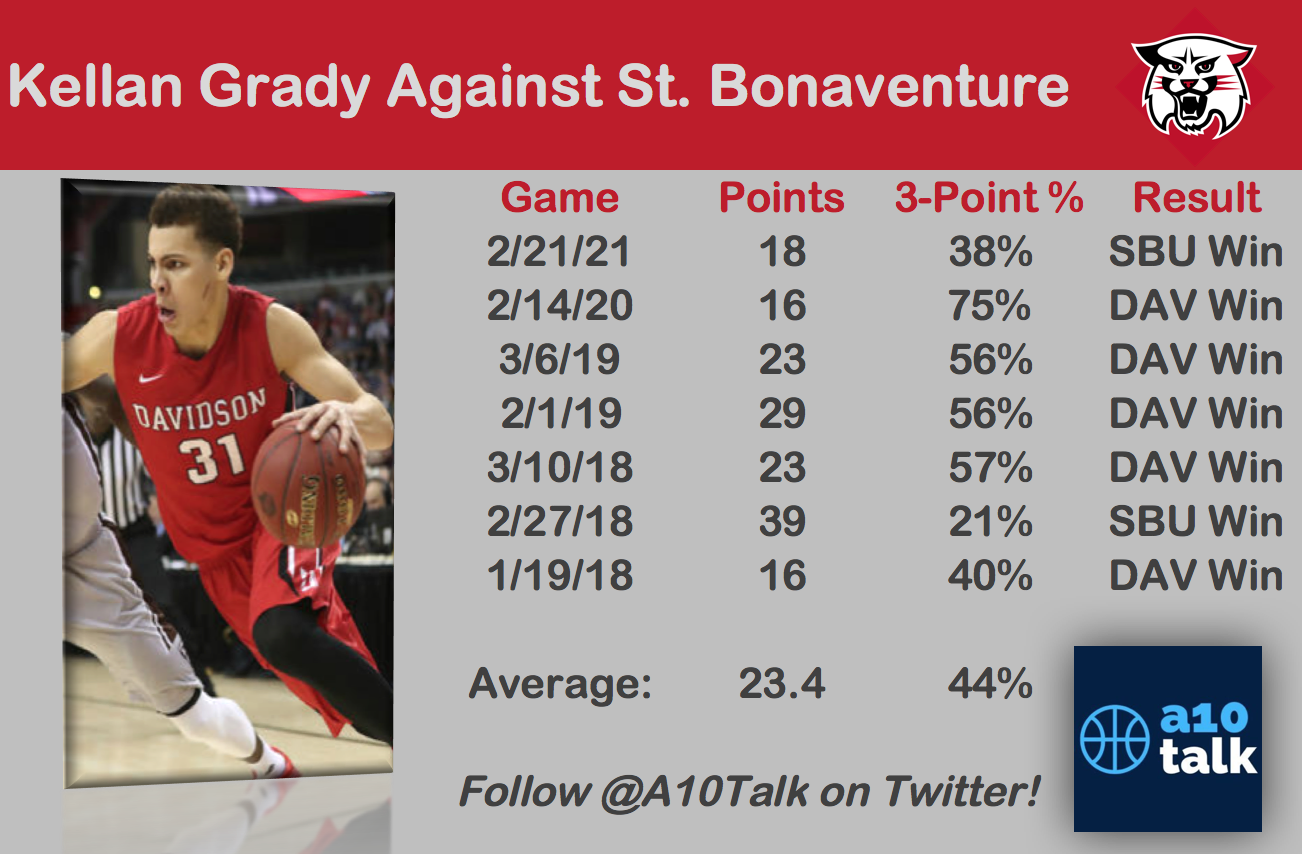 Kellan Grady has played seven games against the Bonnies. He has scored at least 16 points in each contest. Graphic courtesy of @jackmilko10 and @a10talk.

Ever since he was a young teenager, Kellan Grady has modeled his game after Stephen Curry’s. Back in high school, at Catholic Memorial in Boston, Grady wore the number 30 to pay homage to his favorite player.

While at Catholic Memorial, Grady led his Knights to a Massachusetts State Title in 2015 and was named to the Boston Herald Dream Team.

He chose Davidson because he loved Bob McKillop’s free-flowing modern offense and he wanted to follow his idol. Since Steph’s number is retired at Belk Arena, Grady had to pick 31 instead. St. Bonaventure fans would like to think that this is a tribute to Bob Lanier, but this unfortunately is not the case.

(Side Note: The first time these two teams met was in the First Round of the 1970 NCAA Tournament. Led by Bob Lanier, the Bonnies won 85 to 72 at Carnesecca Arena in Jamaica, NY. The Bonnies would go on to make the Final Four.)

Grady showed up at Davidson in 2017 and immediately made an impact. The Bostonian won the 2017-18 Atlantic 10 Rookie of the Year as he averaged 18.0 PPG. Since then, Grady has not looked back. He now ranks 7th on the Davidson All-Time Scoring List and ranks 5th at Davidson in career field goals made. He has been incredible throughout his Atlantic 10 career.

“He’s a good player. [We’re] going to try and make him work hard and try not to give him open looks. But he’s a smart player and highly skilled. He’s one of the better players in the league for a reason. He can shoot the ball from deep, he can take you off the bounce, [and] he’s got a [mid-range] game. Guys that can score at all three phases are really difficult. I don’t think it’s just us that has had a hard time guarding him, everyone over the last four years has had a tough time guarding him. We try to make it as hard as we can against him, but we can’t give him the easy ones. We know what we’re up against, he’s a heck of a talent.”

For the Bonnies to beat Davidson for the second time in four days, they will have to keep Kellan Grady in check.

How Do The Bonnies Win?

As Coach Schmidt put it, the Bonnies have “a great challenge” in front of them at Davidson. To win, the Bonnies will have to (1) limit Davidson’s shooters, (2) avoid foul trouble, and (3) win the battle of the boards.

Bob McKillop runs one of the best offenses in all of college basketball.

Not only does Davidson shoot it well from the outside, but they make 57.5% of their attempts from inside the arc, which is good for 8th in the nation, according to KenPom.

In conference play, Davidson has shot 34.7% from deep. The Wildcats attempted a season-high 37 threes on Sunday in Olean. Davidson made 13 of those, good for 35%. Hyunjung Lee drained six threes against Bona on Sunday.

Of course, as I discussed above, the Bonnies have to keep Kellan Grady in check. If the Bonnies can restrict Grady to scoring just 15 or fewer, that would prove huge.

I expect the Wildcats to attempt at least 30 threes on Wednesday. Thus, the Bonnies will have to bear down on the perimeter, which they have done successfully all season. The Bonnies have allowed its opponents to shoot 31% from beyond the arc this season, which ranks 51st nationally according to KenPom.

If Bona wants to win on Wednesday, then the Bonnies MUST avoid foul trouble.

All three losses this season have come on the road and foul trouble has played a role in each.

Nonetheless, Davidson ranks 250th in the country and dead last in the conference in Free Throw Rate, according to KenPom. This advanced statistic measures how often a team gets to the free-throw line. Since Davidson does not make it to the charity stripe often, their opponents do not commit as many fouls.

Although Osun Osunniyi picked up two fouls in the first five minutes of the game on Sunday, the Bonnies managed to avoid foul trouble for the duration of the game.

Sure, Davidson has the players that can draw contact in the paint. But they are a pass-happy offense that looks for the open shot first. Hence why the Wildcats only went to the line just six times on Sunday.

On Sunday, the Bonnies out-rebounded Davidson 39 to 25. Bona will need to replicate this in Charlotte on Wednesday.

St. Bonaventure ranks fourth in the conference in rebounding margin (+3.8). They have done a good job on the glass this season, except for allowing VCU to grab 19 offensive boards a couple of weeks ago.

According to KenPom, St. Bona ranks first in the conference in offensive rebound percentage. The Bonnies are tremendous in crashing the boards, and a major reason for this is Forward Osun Osunniyi.

On the other side of the ball, the Bonnies give other teams plenty of second chance opportunities, as they rank 12th in the conference in giving up offensive boards on defense, according to KenPom.

Thus, if the Bonnies can crash the glass and limit Davidson’s second chance opportunities, the Brown and White should be in good shape.

Due to VCU’s victory over St. Louis on Tuesday, the Bonnies find themselves in a very similar position to when they woke up on Sunday. A win at Davidson would keep pace with VCU for the conference lead and it would keep Bona on the right side of the bubble.

I think Osun Osunniyi has a big game and I also think the Bonnies prevail in a nail-bitter.

Jack Milko
Jack Milko recently graduated from the College of the Holy Cross in Worcester, MA. A native of Rochester, NY, Jack grew up a St. Bonaventure Bonnies f...