Man that went fast. The Atlantic 10 regular season has come and gone with a major surprise winner. Conference newcomer (not to mention preseason No.12), the Davidson Wildcats, basically proved what A-10 fans have known for some time yet for whatever reason refused to believe with the Wildcats, that good teams are good teams, no matter what conference they are in.

Bob McKillop’s crew earned their first ever A-10 regular season conference title in just their first year of action, doing so in impressive fashion by leading the league with a +12.3 scoring margin on the season. The Wildcats used the nation’s 4th-highest scoring offense to shoot their way to a regular season championship and a No.1 seed in this year’s A-10 tournament. 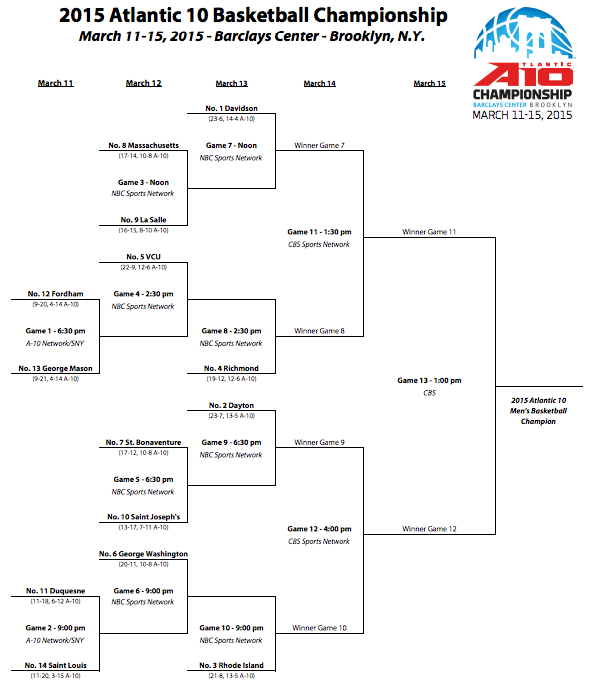 DAVIDSON – The Wildcats’ offense is a thing of beauty and with a healthy Jack Gibbs and red-hot Tyler Kalinoski (not to mention, Sullivan, Barham and the slew of other pieces they have that can light you up) are a team that is absolutely built for March.

DAYTON – #TrueTeam, ya know? Archie Miller has been coaching his tits off since last March where he led the Flyers to an Elite 8 appearance all the way into this season where he finished second in the Atlantic 10 with six scholarship players, a pack up bubble gum and some shoelaces.

RHODE ISLAND – We have waited for this rise to be completed under Dan Hurley and what better way to make that official than by lifting the trophy Sunday afternoon at the Barclays Center?

RICHMOND – Spider fans were talking coaching change a few weeks ago at 13-12 and 6-6 in conference play. What a difference a few weeks makes. Chris Mooney and Co. grabbed a top-4 seed by sweeping rival VCU, giving the Spiders a head-to-head tie-breaker over the conference’s preseason No.1 and are riding a nice six-game winning streak into Brooklyn.

VCU – The Rams have had a disappointing end to their conference season, losing three of their last four games and finishing 5-6 over their last 11 contests. That does not scream A-10 championship run but sleep on the Rams at your own peril. VCU is a couple of baskets from 16-2 despite horrible shooting percentages and a ton of injuries and absences.

GEORGE WASHINGTON -The Colonials may be disappointed in their sixth-place finish/seeding, but Mike Lonergan’s squad remains dangerous and appears to be heating up at the right time.

Why they could win it – GW has the size and the pieces inside out to beat any team in this conference. A loss at Davidson is the Colonials only blemish over their last four games, their three wins coming by an average margin of victory of 20.3 points. Questionable consistency but certainly talented. Don’t be surprised if GW challenges Rhode Island for a spot in the A-10 semis, assuming they survive their Thursday matchup first (no gimme).

Why they might not – The shooting just hasn’t been consistent enough to inspire much confidence in GW’s ability to make their way to Sunday. GW is 2-6 against the top-5 conference teams during regular season play and unfortunately those are the teams you have to beat if you want to earn the conference’s auto-bid.

DON’T COUNT US OUT

St. Bonaventure, UMass and La Salle – What do these three teams all have in common? Size and experience. Each of these teams boasts a win over a top-two team in the conference and have enough talented bigs to give the smaller top-four problems in Brooklyn.

BEMBRY VERSUS THE WORLD

If I’m a Saint Joseph’s fan I’m passing on the tournament pack in favor of single game tickets, but it’s worth nothing the Hawks have wins over both Davidson and Rhode Island and lost by just four at Dayton. I for one look forward to watching the league’s most exciting player attempt to carry the Hawks through Brooklyn.