You call yourself a college basketball fan? I better not see you catching your first glimpses in March. We all know that resumes are made in November and December. St. Bonaventure showed that winning the Atlantic 10 alone isn’t enough to go dancing. So, a balanced OOC schedule is crucial if teams of this league want a shot at postseason glory. This year’s OOC slate sets up nicely — there is no lack of intriguing matchups. Without further ado, let’s take a look at each Atlantic 10 team’s most crucial non-conference game.

I love, love, love this game. The Wildcats get to go into Reno and face a Nevada team that went dancing in 2016-17. Not just that; the Wolf Pack really played Iowa St. down to the wire in the first round. Again, Nevada will be one of the better mid-majors in the country, and this sets up for an offensive showdown for the ages.

Kenpom’s preseason rankings have both Nevada and Davidson as top 100 teams in offensive efficiency. Both teams are senior/junior heavy; this will be an experienced battle between two squads very comparable in talent. I really would like to see the A-10 and MWC do more head-to-head. They’re very similar leagues.

The most crucial game for Dayton is not on the road against Saint Mary’s — I’m sorry, but that’s pretty much a guaranteed loss. At home against Auburn is a different story. Turning the tide with a win like this would build confidence for a young Dayton team. No one knows how Grant’s bunch is going to shape up; this game could be a big indicator. I’m liking the Flyers at home, but this kind of game could be a coin flip, honestly.

It’s Keith Dambrot’s first City Game! Will he do as well as Jim Ferry did last season? Probably not, considering this was really Duquesne’s only bright spot last year. The Panthers are a tough bunch, but that doesn’t mean they’re not beatable. Mike Lewis II went for 15 in last year’s upset, and he’ll be even better this year.

If Duquesne wins this game, it’s an enormous confidence boost, and Dambrot will get plenty of love in his first couple of weeks on the job. Lose, and there really isn’t another “wow” game on the non-conference schedule to win.

Kenpom predicts Fordham loses this game at home (46% chance of winning), so I’m marking a matchup against Tommy Amaker’s bunch as the most crucial. I don’t think Fordham’s non-conference slate is strong enough to do it many favors (unless, somehow, the Rams beat Florida St.), but games like these are what the Rams should look forward to. It’d be nice if Rose Hill Gym was packed for this one — though I’m not sure that will happen…

I know the Patriots have a lot of exciting games on their schedule; notably, they’ll take on Louisville in Kentucky at the start of the season. But let’s not get ahead of ourselves. This Mason team was picked to finish 10th in the A-10, and without Marquise Moore or Jalen Jenkins, Paulsen’s got more to prove in his third season.

That’s where I look to a home game against the Nittany Lions as Mason’s most crucial contest. Kenpom has this usual Big 10 bottom-dweller ranked 40th in his preseason rankings; this team’s much-improved with a good sophomore class. Otis dropped 18 on the road to down Penn St. last year; the Patriots will need him again.

Because this game is in Foggy Bottom, I’m marking this as GW’s most crucial non-conference test. I’m not gonna lie, MOJO scheduled a BEAR of an OOC slate in his first season as full head coach — props to him. In addition to Miami (FL), the Colonials will take on Florida St., Xavier, Temple, Princeton, and Penn St.

OK, so Miami (FL) was picked 4th in the ACC this year, and I don’t doubt that Jim Larranaga has yet another tourney-bound team brewing in Coral Gables. I just like the way GW plays at home. It’s just an inkling; maybe this one goes the way of Yuta Watanabe and Patrick Steeves. Remember what happened two seasons ago when a very talented team came into the Smith Center…

Northwestern’s going to be a bear of a first round opponent in the Hall of Fame Classic, but I think La Salle can put up somewhat of a fight if both B.J. Johnson and Pookie Powell show up. Honestly, the Explorers are going to have some non-conference battles, but in upset in any one of them would be a major push to the program.

The Minutemen will play an enormous game at LIU Brooklyn against Minnesota, a team that was just named #15 in the AP Preseason Polls. The matchup to watch in this one? Rahsaan Holloway vs. Reggie Lynch. The two big fellas should exchange blow after blow in the post, and if the Minutemen could get some help from its perimeter, it could put up a fight against one of the best in the Big Ten. This would be the upset of the season for Massachusetts, but I’m not saying its impossible. 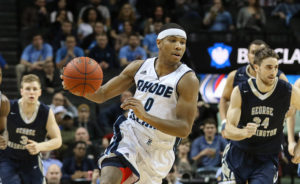 This was a tough choice, considering Rhode Island’s got quite the slate of non-conference opponents. I like this one the most, because it’s a chance to get a win, on a neutral court, against a team that could easily take 2nd in the Big East this year.

This is one where, like last year’s win over Cincinnati, if the Rams can steal it in the beginning of the year, that win will look so much better come Selection Sunday — big matchup in NY.

Georgetown’s a big home opponent (because of the name, yes), but I think Vermont is a team that’ll be more valuable to beat by the end of the season. The Catamounts went undefeated in America East play last year, and believe me, Purdue was shaking at its knees for a good portion of its opening round battle in the NCAA Tournament. If Richmond wants to make noise this year, it’s going to start with this incredible home game.

Khwan Fore recently suffered an injury in which he’s expected to miss some time for the Spiders. If there’s any game Chris Mooney’s going to want his returning leading scorer back for, it’s gotta be this one…

Fine. I’m going to do it. Let’s take down a team that’s ranked #1 IN KENPOM preseason rankings. If the Hawks want to down their crosstown rivals, this is the year to do it. You’ve got three dynamic weapons including a potential sleeper for A-10 Player of the Year in Shavar Newkirk. You better pack Hawk Hill…

Villanova will be dangerous as always, but it’s not often you get a chance to face one of the team’s best on your own court. You’ve gotta take advantage of that. If the Hawks could somehow come out of this one with a victory, I’ll guarantee you that win would carry a very long way come Selection Sunday.

I’ve said it before, and I’m going to say it again: we’ve seen that Travis Ford can recruit, but it’s time to see how well he can coach. A non-conference game like this one is an enormous indicator.

This is it, Bonnies. Your chance to beat the Syracuse. I think everyone in Olean already has this game circled on their calendar, and even though it’s at the Carrier Dome, I’m liking the Bonnies’ chances.

Syracuse will be a solid ACC team once more, but they won’t be as good as they were, say, 3-4 years ago. They’re beatable, and honestly, this is the kind of non-conference win that St. Bonaventure needs to secure a ticket to the Big Dance. This game will carry a lot of momentum into league play as well. I don’t know who’s going to stop Jaylen Adams and Matt Mobley. The Orange better start drawing something up — and fast!

Shaka Smart’s homecoming… AND a crucial game against a talented Texas team? Sign me up. This game will be big for many reasons, and you can bet your butt the Rowdy Rams will be in full force on December 5th. This is the kind of non-conference game that could dictate VCU’s season. Does Mike Rhoades show enough grit in his first year to win a high-pressure game like this? If you’re a VCU fan, you sure as heck hope so.

Grant Labedz
Grant Labedz is a college basketball superfan who loves the entire sport but definitely has favorites in the A-10 and the Big Ten. He has written for ...
umm... What about Massachusetts???
Nevermind. Lol
Thanks for the update.