If the Atlantic 10 could add another program, which school should it go after? In the offseason, this question is prevalent. I wrote an article 9 months ago profiling Wichita State and why its addition to the A-10 would be great for both schools. Unfortunately, the Shockers now belong to the American Athletic Association.

The idea of a 15-team league seems kind of unreasonable; I don’t see any reason for the Atlantic 10 to go fishing for another school right now, as capacity is at or nearing full. But whether or not there’s such thing as “too many cooks in the kitchen” when it comes to college basketball conferences is beside the point. The Atlantic 10 has been reshaped multiple times in the past, and it’s only a matter of time before it happens again. The question then becomes, do teams like Duquesne and Fordham move down to the Patriot League or the MAAC? Do teams like Dayton or VCU eventually jump ship and make it to the big leagues in the Big East (or even the AAC)? Or, does the Atlantic 14 just continue to soak up programs like a sponge? All we can do is speculate.

Let’s just say we could add a program to the Atlantic 10. Any (reasonable) mid-major that would actually have interest. For the sake of the word “reasonable” we’re going to leave Gonzaga out of the question. I don’t think the Zags have much interest in the A-10. There are certainly come programs out there gaining the attention of college basketball fans everywhere. The trick is to find that perfect mid-major (like VCU or Dayton) that’s on the rise and ready to become a consistent threat in the NCAA Tournament. The Atlantic 10 could use a team like that.

If the Atlantic 10 could add another program, here are some of the schools I’d take a close look at.

This would be my top choice. Geographically, Murfreesboro, Tennessee is a little bit out of the way, but it’d really only make sense for the MTU basketball program to join the Atlantic 10. The Blue Raiders have a respectable football program, and it wouldn’t make sense for the Blue Raiders’ smaller sports teams to have to bus all the way up to Kingston, Rhode Island for a game. Middle Tennessee has had Kermit Davis Jr. since the 2002-
03 season, and it doesn’t look like he’s going anywhere (unless that somewhere is up). 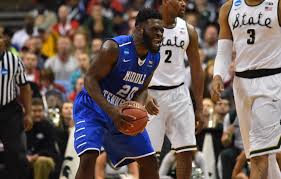 The Blue Raiders have been more than decent these last couple seasons. They’ve done a lot to earn the respect of college basketball fans and analysts everywhere. Middle Tennessee has been a Kenpom Top 50 team 3 times since the 2011-12 season. In the process, the Blue Raiders have made 3 NCAA Tournaments and have scored 2 wins in college basketball’s biggest tournament. The best part? This year’s first round win over Minnesota was hardly an upset. Most experts had the 12 seed as an even pick against the Gophers, and sure-enough, Middle Tennessee came through with the win.

I see this program progressing further in the future, and eventually, the Blue Raiders could be regulars in the NCAA Tournament. With the kind of non-conference games this team is capable of winning, it wouldn’t be surprising to see MTU get more at-large bids in the future. If this team were to join the Atlantic 10, it’d have a great shot at making the Big Dance, even without winning the conference tournament. Middle Tennessee played VCU down to the wire in the Siegel Center last season. Add the Blue Raiders into the mix consistently, and I bet they compete with Rhode Island, VCU, and Dayton for the Atlantic 10 regular season title on a consistent basis. This would be a big move for both parties involved.

UNCW is my second favorite pick to Middle Tennessee, but the Seahawks have a lot of the same virtues. This program has developed consistency at the mid-major level over the past couple seasons. UNCW has made the NCAA Tournament two years in a row, and both seasons, the Seahawks came close to knocking off first round opponents Duke and Virginia. Of course, UNC Wilmington has needed an automatic bid to secure its spot in the Big Dance, but there was a point during last season where the Seahawks would have been a serious at-large contender. Of course, losing 3 games in the Colonial Athletic Association kind of takes that away.

I’d be a little skeptical to go ahead and add a team like UNC Wilmington right now. While I believe Middle Tennessee is headed in the right direction and plans to stay on that course, UNCW’s future is kind of up in the air. Head coach Kevin Keatts, a guy who managed to turn the program around completely in a matter of 3 seasons, has left to take the head coaching job at North Carolina State. Can the Seahawks maintain that level of consistency without Keatts? That’s a question that needs to be answered.

Regardless, I don’t think UNC Wilmington would be a bad addition to the Atlantic 10, but I’m not sure this is the type of team that’s going to consistently compete for at-larges in this league. This UNCW team won at St. Bonaventure last season, so I don’t doubt its ability to be competitive in the Atlantic 10. But at the end of the day, we need teams that are going to help us get 4-5 NCAA Tournament teams every single year. If UNC Wilmington continues on this path, I think it could get there. For now, it’s got some more seasons to prove itself, and once it’s looking at a few more trips to the NCAA Tournament, and maybe an at-large consideration, this could be a great addition.

Try to look past the awful season that the Panthers just had, going 14-16 and absolutely melting down before conference play. The AAC got Wichita State from the Missouri Valley, so maybe the Atlantic 10 can get the next best thing. Northern Iowa has had its fair share of up and down seasons, especially since winning 30 games back in 2009-10. Who could forget the famous Ali Farokhmanesh shot in the NCAA Tournament? This program has proven it can make the NCAA Tournament as an at-large, but it has also had some petty poor seasons. 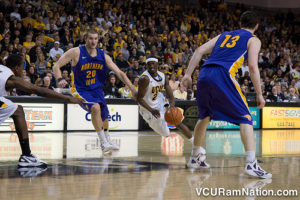 The Panthers went 31-4 in 2014-15, and one of their losses was in double overtime to VCU. They’d also have a great season in 2015-16, making the NCAA Tournament and beating Texas in the first round, but combining their 2013-14 and 2016-17 seasons, the Panthers only had 30 total wins. That kind of inconsistency can be looked past as long as Northern Iowa can have some of those really stellar seasons. Overall, this team has learned to win when it absolutely needs to (excuse the meltdown against Texas A&M in the 2nd round of the NCAA Tournament). The Panthers have won some big games when they probably weren’t supposed to, and they’ve brought in and developed some great talent in Cedar Falls. This program has been impressive since Ben Jacobson took the job.

Would this be a good fit for both sides of the equation? I think the Atlantic 10 could use a program like Northern Iowa. To have a school that has produced multiple 30 win seasons in the last decade would really be beneficial. If this team gets back on its feet (which I believe it will), it’d have a chance to be a top contender in the Atlantic 10 year-in and year-out. Northern Iowa could benefit from a tougher conference schedule, especially now that Creighton and Wichita State are gone. Not to say Illinois State isn’t good competition, but VCU, Dayton, and Rhode Island is a more intimidating bunch that provides a chance to get resume-building wins.

Really, there isn’t too much of a need to add a school to the Atlantic 10, but if the time ever comes to do so, it’d behoove the conference to make a smart decision. The Atlantic 10 should only go after schools that could be at-large contenders at least 50% of the time. We want schools like Middle Tennessee that are good enough in non-conference to have a shot at making the NCAA Tournament even if they don’t win the A-10 Tournament. That’s the next step for this conference; get to the point where it’s averaging 4-5 NCAA Tournament teams a year. Make sure to add your input and let us know who you’d add. Come join the discussion in our forum.