The A-10 regular season has whittled down this year’s conference race to four teams: VCU, Saint Joseph’s, St. Bonaventure and Dayton. Only the Flyers were picked to finish in the top-four this preseason. Needless to say this has been one wild conference race, a race that will wrap itself up this Saturday. 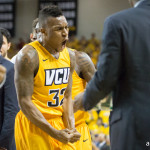 VCU (13-3)
A loss at GW and the Rams would have been in serious of danger of going from sole-possession of first place to potentially on the outside looking in of this year’s top-four. But the black and gold gutted out a tough road win and are now the only team in control of their regular season title destiny thanks to a head-to-head win over fellow 13-3 leader, Saint Joseph’s. VCU has a tough finish with a home game over Davidson before heading to UD Arena for what could be a a regular season finale for the title. 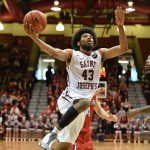 SAINT JOSEPH’S (13-3)
A season after finishing an inconvenient 7-11 in conference the Hawks have completely turned things around and have given VCU no room for error in the final A-10 push. Saint Joseph’s is the highest rated team in the conference according to kenpom’s computers and are the only top team without a head-scratching loss. The Hawks will hope to get some help from either Davidson or Dayton and will need to pull off a tough road win in Rochester against Bona team that beat them once already this season to pull off a surprising A-10 regular season title after being picked to finish seventh in this season’s preseason poll. 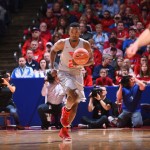 DAYTON (12-4)
The Flyers will need some help after a surprising home upset loss to a banged up Rhode Island team. After an 11-1 start, UD has lost three of their last four including their last two home games and it gets no easier this week. The Flyers will first need to pick up a road win against a Richmond Spiders team that leads the conference in effective field goal percentage and will be celebrating their senior night. They close the season by hosting a VCU Rams team that is the current A-10 leader and could very well be fighting for their first-ever A-10 regular season title. 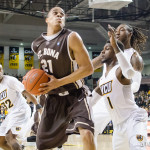 ST. BONAVENTURE (12-4)
If we’re being honest I think we all kinda slept on just how talented Bona’s returning group was this season. Marcus Posley, Dion Wright and Jaylen Adams makes up one of the best trios in this league and under the guidance of Mark Schmidt has the Bonnies in contention for an A-10 title. Step-one is a series sweep of Saint Joseph’s this Wednesday in Rochester’s Blue Cross Arena, over 100 miles from the Bonnies’ Reilly Center. A win there with some help around the conference could put the Bonnies in contention with a tough road game against a SLU team that has been a very tough out lately and has competed with the league’s best at times despite their less-than-intimidating 5-11 record.

Regardless of who comes out on top, these four have earned themselves an advantage in this year’s Atlantic 10 tournament, none of which will play Thursday in Brooklyn thanks to VCU’s win over George Washington on Saturday. Will that see one to a tournament final, potentially securing an A-10 tournament spot they might have missed out on? Or is there another A-10 team waiting to match VCU’s four-games in four-days run this season? With just two weeks of guaranteed basketball remaining, we’ll know soon enough.

Hard to call these guys as sleeper as they sit just outside of the top-four and are currently in the NCAA tournament bubble discussion, but in terms of winning four games in four days I think the Colonials have the best shot at doing so. They are talented, experienced and large. The Colonials are one of just three A-10 teams currently within the top-six in both offensive and defensive efficiency in A-10 play, joining VCU and Saint Joseph’s.