The top of the conference is starting to shake out. Right now, we have six teams that are separating themselves from the rest of the league, both in terms of record and overall talent.

Looking at the standings, the A10 currently looks like this: 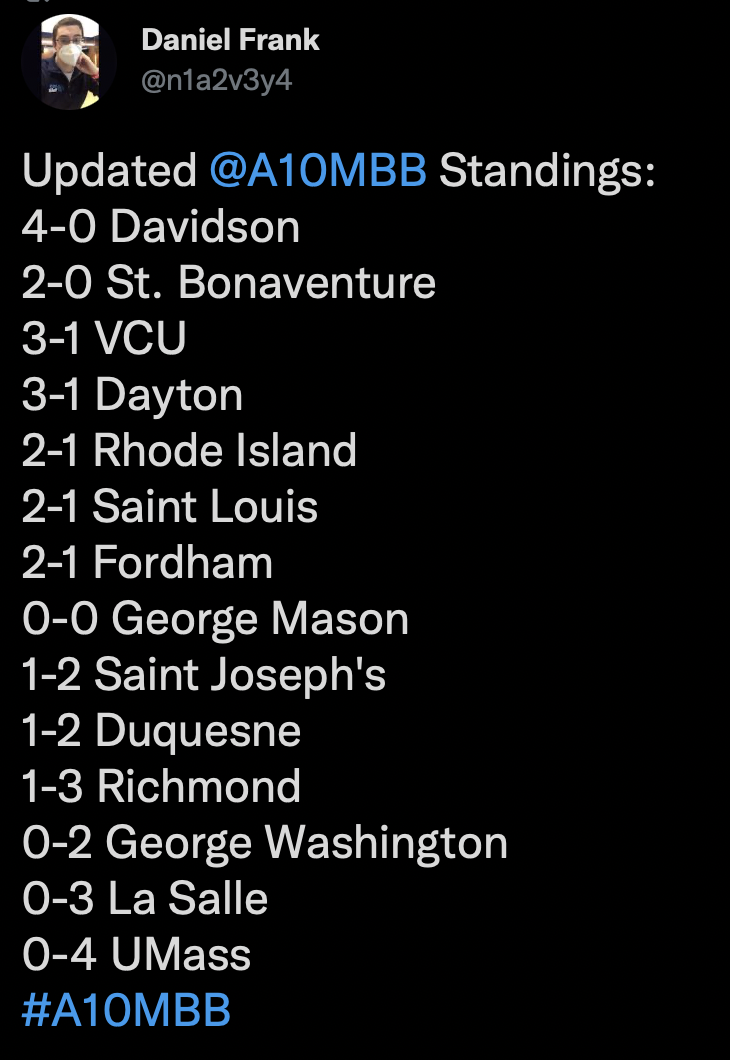 As you can see, there is a clear cut off point for the top of the conference. Those teams are Davidson, St. Bonaventure, VCU, Dayton, Rhode Island, and Saint Louis. We will call these teams the “Big 6”.

Let’s take a closer look at those teams and how they look to finish the season, plus some wild cards that could shake things up.

The Wildcats lead the conference at 4-0 and currently look like one of the 25 best teams in the country. They’re the second best three-point shooting team in college basketball at 41.3% and #4 in effective FG%. They did pick up a win at home against one other Big 6 team in Rhode Island, but it wasn’t convincing. Other than that, they beat Saint Joe’s, UMass, and Richmond. Their schedule does get tougher later with two games against VCU, at Bona, at Dayton, at Rhode Island, and home vs SLU. The VCU games will be interesting, as the Rams are the best 3-point defense in the country.

As for the Bonnies, they didn’t look great against La Salle, but came back to win a big game at home against VCU. St. Bonaventure seems to have gotten their mojo back, but a Tuesday game at Dayton could shake things up and make them human again. They also have the easiest schedule out of the Big 6, only having to play only VCU again but everyone else once. That could help them as long as they don’t drop any games to the bottom teams of the A10.

These two are the top of the conference and are the current favorites to win the regular season title.

Dayton is one of those teams that can beat anyone but also lose to anyone on any given night. Don’t let the early Quad 4 losses fool you, this Dayton team is not the same team from early on in the season. Dayton can defense at an elite level, and if they are hitting shots, watch out. They are in this category due to a close loss to VCU, but the win at home against SLU brought them back into the mix. They have won three in a row and can make some serious noise with a win at home this week against the Bonnies.

VCU was in my favorites list with Davidson and St. Bonaventure until the Bona game happened. I really thought VCU was going to just strangle the league to death with defense and turnovers that turn into easy buckets. The Bonnies kind of exposed the Rams a bit. If VCU is not playing well on defense and not forcing a lot of turnovers, I’m not sure their offense can save them. This VCU team can be very good and beat anyone, but the offense has to be better if the defense is not working on some nights. They play Davidson in 2 of their next 3 games. If they can stop that potent of an offense and win at least one game against Davidson, then the Rams might get back in the favorites list.

Saint Louis is interesting. The Billikens look good, but then collapsed a bit against Dayton. They were in that game, but the deficit was too much to come back from even though they only lost by 5. They got back on track with a win against Fordham. This team can be very good, as they have some evidence with wins against good teams in the noncon (Boise St, Iona) but they are going to have to prove it by beating Rhody, Bona, Davidson, or VCU. Until we get there, they are in my third favorites.

Rhody is an interesting team. They took Davidson to the wire on the road before collapsing in the last minute of that game, but have come back to beat Saint Joe’s and UMass pretty easily, although those two teams are at the bottom half of the conference. I’m not sure what it is from me. The team is top 100 on offense and defense, is #2 in 2pt defense, is top 25 in scoring from 2, and top 20 in both effective offense and defense. I think right now it is the lack of wins against the other Big 6 teams, as Rhode Island has lost the only game they have played against them (Davidson). They play La Salle, GW, and Richmond until they finally play another good team in Dayton. The Rams are definitely in my top teams list, but I have to wait until they play/win against another good team until I can believe they can win the conference. Still one of the favorites, though.

We technically do not know anything about George Mason since they have yet to play an A10 game, but they can be a good team. They are another team that can compete with anyone but lose some stinkers, as evidenced in the non-conference. I see them finishing in the middle of the conference, but if they get a couple of good wins against any of the Big 6 teams, they could be in line for a top 4 finish. We will see how they look in their first week back.

As for Richmond, this team can’t catch a break. They dropped a stinker to Saint Joe’s at home, then lost again at Saint Louis. They lost later on a buzzer beater to Davidson. Their only win is to a bad UMass team. They have the talent on offense to beat anyone, but their defense is deplorable, which is why they are losing games. It needs to get better if they want to turn the Big 6 into the Big 7. But I’m not sure those early losses are going to allow them to come back into the race for first. However, they definitely have the team to make a run at 4th and get a double bye in D.C. They just need wins against the Big 6.