As the Atlantic 10 Women’s Basketball regular season is in the books, it is time for the a10talk WBB staff to pick its annual awards winners.

Of course the panel is our quartet of reporters who have provided coverage all season in Daniel Frank, Ed Major, Nathan Strauss and Zachary Weiss.

Each of the four panelists voted for all of the categories the coaches vote on in the official poll except for the all-academic team.

The criterion used by each was likely different and below feature the results. For all-conference teams, there were six players per team to mirror what the Atlantic 10 has done in recent years.

Breen was one point away from being a unanimous selection. This season, Breen joined Saint Louis’s Brooke Flowers as one of two players in the conference to average a double-double, accomplishing the feat 17 times this season. Breen’s 16.3 points per game placed her fourth in the A-10 and the 10.5 rebounds only trailed Flowers. As a forward, Breen also recorded 48 steals, while her 35.9 minutes per game placed her fifth in the conference. In her three seasons with the Minutewomen, Breen has shot at least 41.2% from the field, while being an even larger focal point on scouts and the team’s A-10 Championship success last season has propelled it to new heights this year. 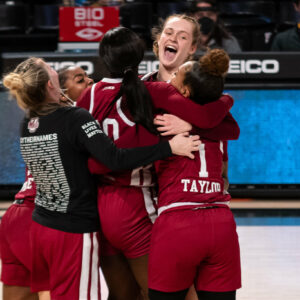 Following Myriama Smith Traore’s preseason season-ending injury, Flowers was going to be counted on even more as a leader and all she did was set a career best and A-10 high with 80 blocks. Flowers previous high was 68 and she accomplished her 80 swats in seven less games. Additionally, Flowers’s 196 defensive rebounds ranked second in the conference. Flowers received all four first-place votes from the panel, one of two categories to have this distinction. 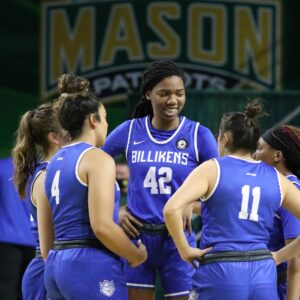 Brugler was a consistent force as evidenced by receiving the Atlantic 10 Rookie of the Week honors six separate times, three more times than Davidson’s Issy Morgan, her closest pursuer. Brugler raised her game during A-10 play, scoring in double figures in 12 of 15 games, including her conference debut when she scored a career-high 19 points at VCU. 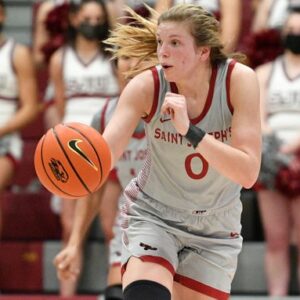 Three different players received votes in this category, but Cook’s 14.7 points per game, which were 8.5 points higher than a season ago won out. She also had 75 assists versus 45 turnovers. She twice set a career high first Dec. 31 when the Flyers hosted Wright State and again Feb 5 against George Mason, scoring 29 points in 25 minutes, shooting 13-for-15 from the field. As a sophomore, Cook still has multiple years to build on these numbers. 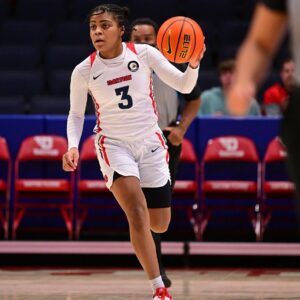 Despite starting seven of 29 games and averaging 20.9 minutes a night, Squires stuffed games on a consistent basis, a pretty strong comeback for a player whose has been affected by shin splints, stress fractures and compartment syndrome. Squires was able to show some of her form off last year at A-10’s but this year saw her points average rise by 5.1 and her 44.6% clip from deep ranked second in the conference and she had 50 triples on the season. Like Flowers, Squires received all four first-place votes in her category from the panel.

All season long, Verdi inspired his team to plant the flag and find ways to win together. Through his time at UMass, Verdi had a vision and now the entire conference is taking notice at the most electrifying offense in the country that allows anyone that steps foot on the court to achieve success. Already, this team has set a program record for wins and even the Minutewomen had to play four games, during which time the other three of the top four in the conference served as the opponent, there was a rally. If a team beats UMass in Delaware it will have to play focused basketball for 40 minutes. 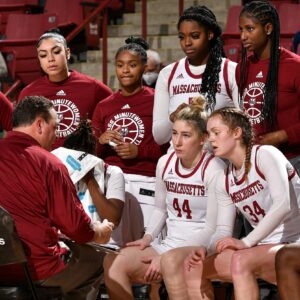 Zachary Weiss
Zachary Weiss has had a 10 year journalism career, with the past three mainly focusing on Duquesne Athletics and the Atlantic 10.