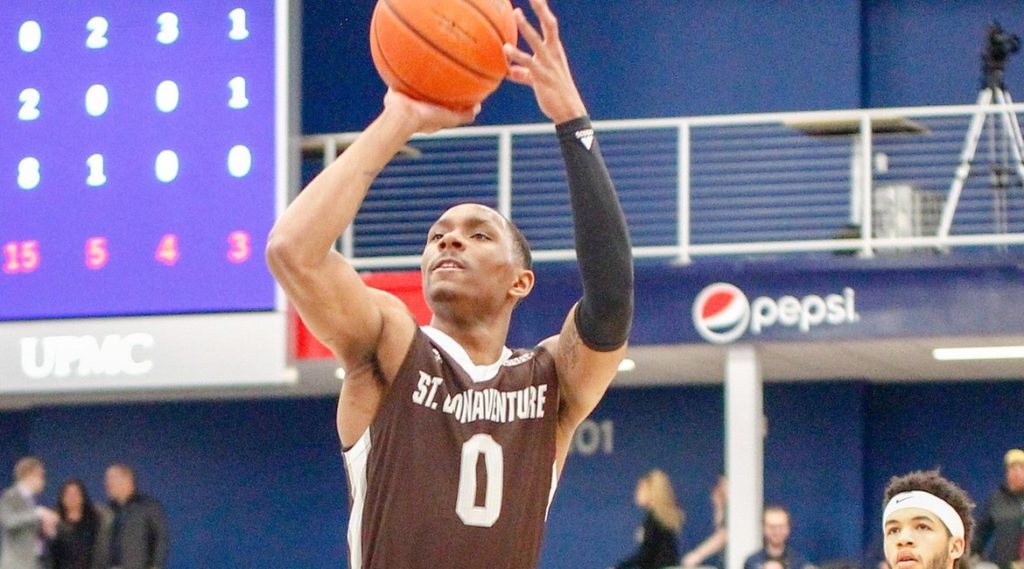 At this point last year, St. Bonaventure just wrapped up its fifth game of the season: a 61-57 setback to its fellow Western New York rival, Canisius. This year is obviously quite different. To date, 2020-21 non-conference schedules have been as reliable as the one-seed in recent Atlantic 10 tournaments. (Yes, only two one-seeds in the last decade have cut down the nets as the Atlantic 10 champion: Temple in 2010 and most recently, St. Louis in 2013).

With Covid-19 numbers surging once again, a bumpy month lies ahead. Back on October 30, St. Bonaventure announced that it would compete in “Bubbleville,” a spin-off of what transpired in Orlando this past summer with the NBA. The Brown and White were scheduled to open up this season in the bubble in Uncasville, CT this Wednesday against Towson. They were then pitted against Stephen F. Austin the following day. Further additions were added to the schedule shortly thereafter, including the annual showdown with the Vermont Catamounts on Dec. 1.

Then, the cancellations commenced.

First, Vermont suspended all team activities until December 18th. This forced the Bonnies and the Catamounts to cancel their game scheduled for December 1. Hopefully the two programs will meet again in the 2021-22 season.

Two days after Vermont shut its doors, two other doors opened, as St. Bonaventure announced that they would play the Akron Zips in Cleveland on December 15 and host Buffalo on December 22.

Then, the virus struck Olean hard as cases began to rise on campus and in surrounding Cattaraugus County. A positive test on the St. Bonaventure Men’s basketball team forced the program to suspend all team activities on November 19.

Shortly thereafter, the Bonnies had no choice but to pull out of “Bubbleville” and quarantine. The San Francisco Dons, Bill Russell’s alma mater, will replace Bona in the Constitution State bubble.

As of November 23, the only action on St. Bonaventure’s non-conference schedule is “Maction,” as both Akron and Buffalo hail from the MAC Conference. The MAC may not be the “Mighty Atlantic 10 Conference,” but the Zips and the Bulls are both quality opponents.

If you missed Woj label the conference as such on Draft Night, here it is below, with thanks to @LilBonaX:

in case you missed it, here it is by request from @kevinassignment: the highlight of the 2020 #NBADraft @wojespn pic.twitter.com/ZTtTmyMlv9

Coming off a 22-win season, the Akron Zips are determined to return to the Big Dance for the first time since 2013. Coaches around the MAC picked Akron to finish third in the conference in this year’s preseason poll. The Zips return ten players, including the reigning MAC Player of the Year, Loren Christian Jackson. Standing at only 5′ 8″, the Chicagoan averaged close to 20 PPG last year while shooting 42.8% from three. Kyle Lofton will have his hands full in trying to slow him down in a must-watch matchup between two terrific floor generals.

Akron had planned on beginning its season this Wednesday, November 25 in Murfeesboro, TN against the Blue Raiders of Middle Tennessee State. Last season, St. Bonaventure defeated Middle Tennessee 66-65, thanks to a bucket from Dom Welch that put Bona ahead with 13 seconds left.

Nonetheless, Matt Norlander of CBS Sports broke the following news just a couple of days ago:

Akron men’s basketball is going on a pause due to COVID, sources tell CBS Sports.

With Akron in quarantine, the Middle Tennessee game was scrapped. As of right now, St. Bonaventure is Akron’s only non-conference opponent. Like many others, the Bona-Akron game, as Jimmy Cliff would say, is “sitting here in limbo.” @SBUnfurled has developed a beautiful spreadsheet breaking down each team’s quarantine list and Akron must wait until December 4 to resume play, per NCAA protocols.

Thus, it would be surprising if Akron scheduled a game between December 4 and December 15, the day in which the Bonnies and the Zips are slated to play at Quicken Loans Arena in Cleveland.

However, Akron could schedule a game against a geographically viable program such as Cleveland State, Youngstown State, or even a Division III opponent like John Carroll.

Ultimately, like every other team in America, the virus has the final say in Akron’s non-conference slate.

Last season, the Bulls defeated St. Bonaventure 84-79 in Buffalo. This year, UB remains just as tough. Watch out for Jayvon Graves and Josh Mballa, as both players earned preseason-MAC honors. Graves averaged 17.1 PPG last season while Mballa, a transfer from Texas Tech, led the team in rebounding. Rochester, NY native Jeenathan Williams, who pitched in 11.6 PPG a season ago, will certainly contribute to a Bulls squad picked fourth in the MAC preseason poll. Buffalo lost two starters from a year ago, but Graves, a potential 2021 NBA Draft Selection, will try to lead the Bulls to back-to-back NCAA Tournament appearances.

By the time Buffalo visits the Reilly Center on December 22, the Bulls hope to have four games under their belts. They were supposed to open up the season against Gannon (Division II) this Wednesday, November 25, but that game has since been cancelled. Instead, the Bulls will open up their season next week in “Bubbleville,” although Buffalo has yet to announce its opponents.

On December 6, the Bulls are scheduled to take on its conference foe Bowling Green in Ohio. The Falcons are tabbed to finish first in the conference, according to the MAC preseason poll.

Then, on December 19, Buffalo will travel down the Thruway to take on the Syracuse Orange. A showdown with West Virginia in Morgantown wraps up their non-conference schedule on December 29. The game with Bona is sandwiched in between those two Power-Five opponents.

Buffalo has more pieces in place for its schedule, but if Western New York continues to have high Covid-19 rates, then Buffalo’s non-conference season is in jeopardy.

Can the Bonnies Add More Pieces to their Non-Conference Puzzle?

Per @SBUnfurled, St. Bonaventure can resume basketball activities on December 3, if no other positive cases arise. If things go Bonaventure’s way, then Mark Schmidt will have an 11-day window to schedule possibly one or two games before the game in Cleveland versus Akron.

Similar to Bona, historic rivals Niagara and Siena are in quarantine, but they are allowed to resume activity on November 28. Canisius, another Big 4 rival, finished its quarantine period yesterday following a positive test two weeks ago.

The MAAC Conference is permitting non-conference scheduling. Right now, Niagara plans to open its season on December 11 against St. Peters of New Jersey. Canisius plans to host Marist on December 11 to begin its season. Currently, both of these teams do not have any non-conference opponents scheduled and they are both geographically viable. Perhaps Bona can figure out a way to play Canisius and/or Niagara between December 5 and December 10. Even one game in that period would be a terrific addition.

Another idea is to schedule an exhibition against a nearby, non-Division I opponent. In recent years, Mansfield and Alfred State have visited the Reilly Center to play a pre-season tuneup against Bona. Last year, Gannon paid a visit to the RC. Perhaps Coach Schmidt and Athletic Director Tim Kenney can look that direction once again.

Ultimately, St. Bonaventure should look to add at least one more game to its schedule, if the virus allows. An extra game will  provide one more tune-up before the gauntlet of conference play begins. Especially this year, with Richmond, St. Louis, Dayton, and Duquense all vying for a top four spot in the “mighty” Atlantic 10. However, if conditions worsen over the next month, and conference games are the only games played this season, St. Bonaventure has enough experience to fight through early season growing pains and compete for an Atlantic 10 Championship.

Jack Milko
Jack Milko recently graduated from the College of the Holy Cross in Worcester, MA. A native of Rochester, NY, Jack grew up a St. Bonaventure Bonnies f...