It’s crazy to think non-conference play is starting to wind down, but once the holidays pass us by, we’ll be watching conference games. The Atlantic 10 has done a great job taking advantage of significant non-conference opportunities against opponents worth beating: LSU, Saint Mary’s, and Wisconsin are just a few of the teams to fall to the A-10. Here’s a look at some of the A-10’s most impressive wins based on Kenpom rankings. The league has taken down 11 in the top 100 as of December 11th.

But with a few weeks remaining, the A-10 still has some pivotal opportunities, and everyone pushing for a 3+ bid league this year would really benefit from the conference picking up a couple of these wins.

I think this is the biggest remaining game for the conference in terms of reasonable chances of winning as well as implications for the whole league. 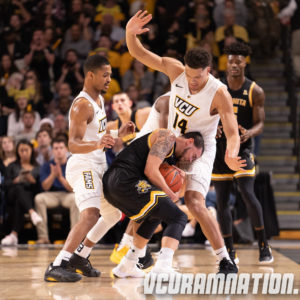 VCU has a lone good win over LSU at home but missed out against Tennessee and Purdue down in Florida. Wichita St. has been steadily improving, and the Shockers are 8-1 with a road loss to West Virginia. The Rams get to face Wichita St. on their home floor, which could undoubtedly be a Quadrant 1 win by the end of the season if the Rams are able to pull it off. The Shockers are up to 39th in Kenpom and have one of the most efficient defenses in the league, similar to VCU. Wichita St. just held Oklahoma St. to 61 points on their home court and also beat South Carolina 70-47 earlier this year. This game will be especially interesting because of the style clash. Neither team earns its money on offense; rather, defensively they are juggernauts. If Marcus Evans can break out of this mini slump and will his Rams to a win on the road over Wichita St., it would solidify VCU even further as an NCAA Tourney team this year.

I list this 2nd because the chances of SLU pulling this one off are a bit slimmer in my mind; regardless, the Billikens roll into Birmingham on Saturday to face the undefeated Tigers and have a 15% chance of pulling off the upset according to Kenpom. While unlikely, it would be an incredible win for Saint Louis who’s still trying to prove it belongs in the conversation of potential NCAA Tournament teams this year. The Billikens’ best win this season was at home against Belmont, and unfortunately Seton Hall ran away from SLU pretty early on after Myles Powell and the Pirates visited Chaifetz Arena. This is a chance to get some serious momentum.

This game should have pretty big implications, but Colorado has lost its last 2 (including one at home to Northern Iowa), so this shouldn’t be a top 25 matchup when next week’s rankings come out. However, the Buffs could be a serious contender in the Pac-12 this year, and a win over a strong P5 team would still be a resume boost for the Dayton Flyers. This game is interesting as Colorado has been one of the worst teams defending the three this year, and Dayton has absolutely scorched the nets (40.3%), especially recently. I think the other factor working in Dayton’s direction is the fact that it’s being played in Chicago. I caught the Flyers at the United Center a few years ago when they faced Northwestern, and the UD faithful came out in droves… even more than the hometown team Northwestern Wildcats. This will feel like a home game.

This game shouldn’t be understated, as any chance to win on the road against an SEC team (and one that could be a top 100 team) is one you will take. Richmond has been hot recently, but it certainly doesn’t want to overlook upcoming contests against Charleston, Old Dominion, and Radford; those all feel like must-wins if the Spiders want to continue creeping up onto the bubble. The Crimson Tide are just 4-4 this year with their best win coming at home to Furman; Rhode Island was able to run them out of the Ryan Center earlier this year. Right now, Kenpom has Alabama favored by 2 points, meaning Richmond should be the better team heading into the game on December 29th. Worth noting is how poor Alabama has been at taking care of the basketball. Jacob Gilyard should have a field day if these guys aren’t making sharp passes.

George Mason has lacked big opportunities in non-conference play with the exception of a true road game against Maryland that would have been a very difficult win in any circumstance. They’ll get a chance to prove themselves before league play when they take on TCU on the road. The Horned Frogs’ best win this year is UC Irvine, and it was by just 1 point at home. I’m not convinced this is an NCAA Tournament team by any means, but it’s a Big 12 opponent on the road for Mason, so it won’t be easy. If GMU can come out of there with a win and then beat VCU at home at the start of conference play, they could start getting some bubble chatter.

Rhode Island vs. Western Kentucky (Western Kentucky’s best player is now out for the season, so I don’t envision a home win over the Hilltoppers carrying a ton of weight come March).