This is Duquesne forward TySean Powell:

Unsurprisingly, a quick YouTube search for the rangy Twinsburg, Ohio native produces jaw-dropping dunk contest highlights, and in-game clips of Powell posterizing opponents. The 6-foot-8-inch sophomore has a wingspan approaching 7-feet and, with that length, needs only a small window to leave the floor and ferociously attack the basket. This year, however, the high-flying Powell is proving to have an even greater impact, below the rim.

During his freshman campaign, Powell earned 413 minutes, over the course of 29 games, and logged a grand total of 8 assists. Now, as the Dukes push down the home stretch of Atlantic 10 play, the sophomore has notched 10 helpers in Duquesne’s last three contests alone.

Powell’s increased assist rate isn’t a revelation to Duquesne head coach Jim Ferry. “It’s something that he’s worked on,” Ferry said, “it’s something he’s got a really good feel for.”

“I found out in the preseason that I was a good facilitator,” Powell told a10talk.com, “I was able to find people cutting and could deliver the ball on point. The coaches told me, I make the offense better with my passing.”

For Powell though, it wasn’t a stretch.

Not having hit his big growth spurt until his junior year in high school, he learned the game through playing multiple positions in AAU, and as a small forward during his first two years of high school.

“I played on the perimeter my freshman and sophomore years in high school, so I see the game in a lot of different ways.”

With increased playing time this season, Powell has benefited by being on the floor with seniors Derrick Colter and Micah Mason – one of the most lethal backcourts in the Atlantic 10. Colter is capable of scoring at will, and Mason is one of the best 3-point shooters in the country. They are priorities 1 and 1A on opposing scouting reports.

“Micah and D.C. (Colter) are great spot-up shooters. When I catch the ball with my back to the basket, I’m always looking for them. I know they have confidence in me to make the right play – that’s what they’re always telling me.”

It’s a dynamic coach Ferry has instilled in the Dukes program. This season, Duquesne is assisting on 56.7% of made baskets; 4 percentage points above the national average.

“We kind of play that way as a team. Assists are very important to what we do, making sure the ball finds a good shot,” said Ferry. “I think TySean helps us with that – he’s unselfish and he sees the floor.”

Last Tuesday, Duquesne was embattled in a difficult road contest at Dayton. With under 30 seconds remaining in the first half, and the Dukes trailing 35-33, Jim Ferry took his “use it or lose it” timeout to draw up a play for the final possession.

“It’s a play we actually run a lot,” Powell said.

The set Ferry called for has junior forward L.G. Gill set a ball screen for sharp-shooting Micah Mason (a career 47.2% 3-point shooter), while Colter, who has passed to Mason moved to the weak side. 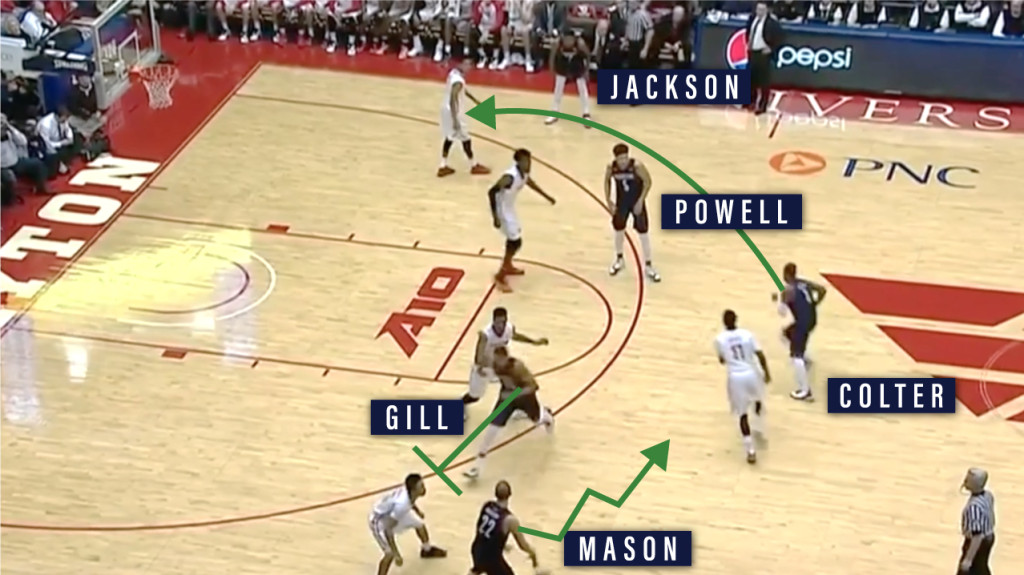 Even with the ball screen well behind the arc, the defense has to respect the deadeye shooting of Mason. In the following image, you begin to see how a shooter with endless range can manipulate a defense. With Duquesne having overloaded the weak side, and Dayton defender, Xeyrius Williams offering such a strong show of help on the screen, there was no one to protect the basket. 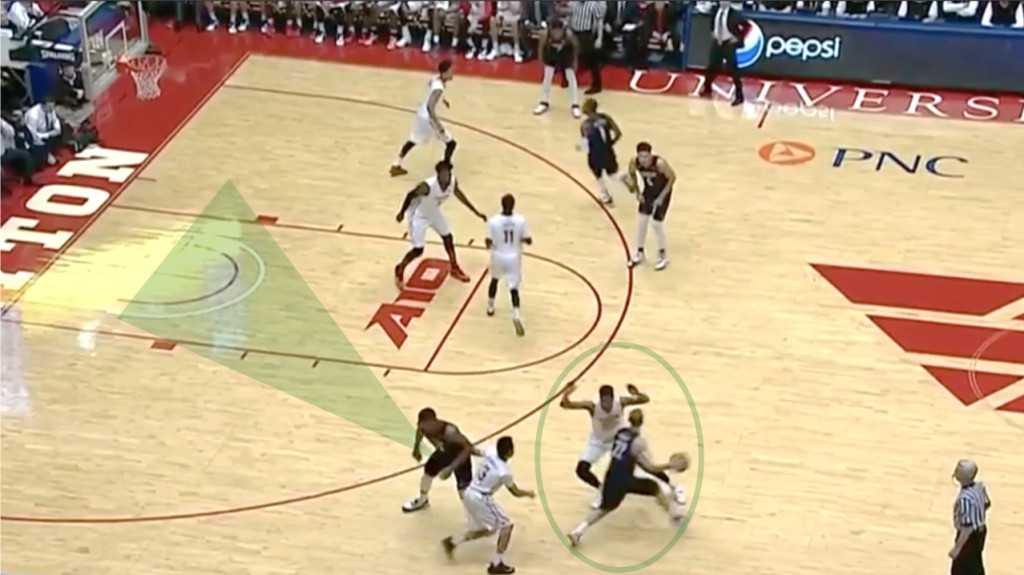 From here, Mason tosses to Powell who is perched at the top of the key. On the play, Gill has the option to slip the screen here – which he does most of the time. With an unobstructed path to the rim, his read is fundamental – head to the cup. 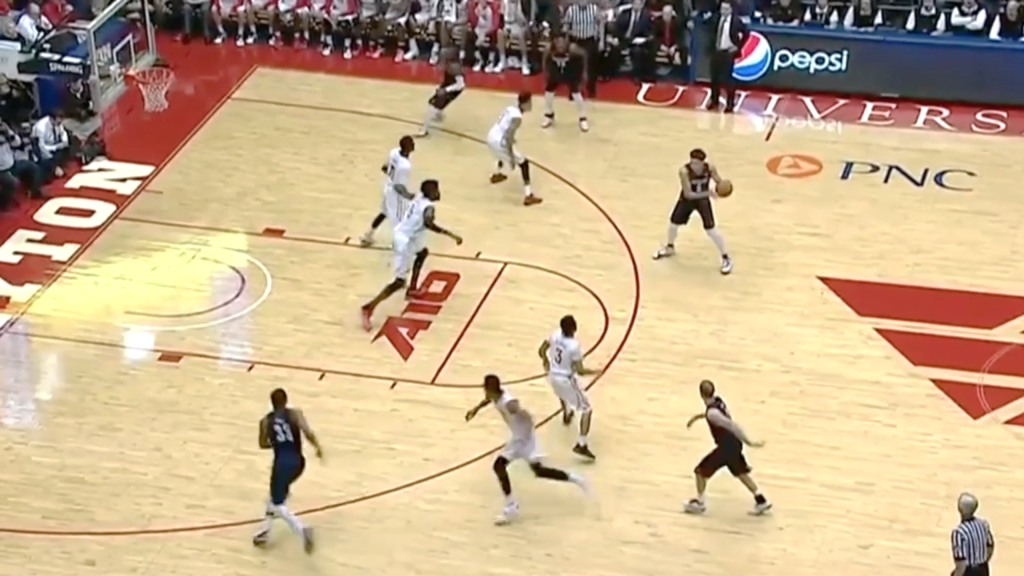 Now with the ball, Powell had a little more to consider than his teammate.

“If the opposite side defender isn’t there, then I know the pass will be there,” Powell said. “I didn’t see the help side defense in my peripheral, so I knew that pass would be wide open, and I just threw it.”

But it still wasn’t that easy.

It just so happened that Powell was being defended on the play by the biggest player in the Atlantic 10, Flyers freshman “Big” Steve McElvene.

The 6-foot-11-inch center has 3 inches on Powell, and had all but taken away the possibility of a backdoor lob. But, being a crafty left-handed player, Powell had an option not available to a righty in this situation; the bounce pass.

“He (McElvene) was sagging off of me a little bit, but I knew he wouldn’t be able to get to the bounce pass.”

Powell diagnosed all of this with the aplomb of a seasoned, table-setting point guard, and started to make the pass before Gill had even crossed the 3-point line.

“A lot of my passes are off of instinct – once you think about it, it’s too late. You see an opening, you just have to take it.”

The gorgeous backdoor pass hit Gill perfectly in stride for an easy dunk that tied the game, 35-35 going into halftime.

TySean will continue to do TySean things. He’ll make life miserable for opposing defenses in pick and roll situations. He’ll fly high and rattle rims. But this season, as he embraces the role of facilitator, this too is Duquesne forward TySean Powell: