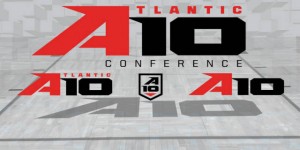 The company behind the A-1o’s “Who’s Next” branding campaigned, 160over90 was back at the wheel once more, altering the font and color scheme that swapped out the old blue look in replace of a black and red design (PMS red 485 and PMS neutral black).

An official A-10 press release described the logos as “imagery of speed and strength, and are a direct reflection of the overall message developed during the “Next” campaign”.

“The Atlantic 10 Conference has a proud and rich history, thus it was time to redesign our logo highlighting the strength, speed and commitment of this league,” stated Commissioner Bernadette V. McGlade. “Our branding has been updated and modernized to keep pace with our membership. I love the versatility of the new marks, including the ability of our membership to utilize the conference logos in their own approved color palette.”

160over90s previous A-10 “Who’s Next” campaign has been named a finalist for a CLIO Sports Advertising Award. They agency has also developed brand campaigns for Nike, Ferrari, Under Armour, UCLA and the Philadelphia Eagles.