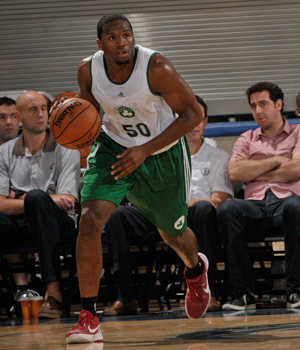 The Orlando Summer League wrapped up yesterday, and alumni of several A-10ers finished the week with varied results.

Andrew Nicholson, a St. Bonaventure product and first-round Draft pick of the Orlando Magic would perhaps lead for A-10 Orlando Summer League MVP, starting the summer off in style with a 24-point, 12 rebound performance, and playing relatively consistent minutes after that.

Richmond products Kevin Anderson and Justin Harper teamed up once again, joining Nicholson and VCU’s Bradford Burgess on the Magic, contributing some big lines but in often inconsistent performances.

Temple’s Dionte Christmas was possibly the most consistent A-10 grad, dropping double-digit point totals in every outing for the Celtics.

Bryant Dunston, Fordham / 28.4 minutes, 9 points, 6.4 rebounds, 1.4 blocks
Dunston was solid but not spectacular for the new-look Nets and probably didn’t do enough to make the team that has recently moved just a burrow away from the 6’8 bigs alma mater.

Bradford Burgess, VCU / 7.0 minutes, 2 points, 0.7 rebounds, 0.3 assists, 67% from the field, 67% from three.
Burgess will probably try and hitch a ride to Vegas with another team, getting almost no time to impress by the home-team Magic. The VCU grad and 2011 Sweet 16 hero saw very limited action in just three games, but was efficient in that microscopic sample, going a perfect 2-2 from long range in his first Summer League appearance.

Kevin Anderson, Richmond / 20.4 minutes, 7.6 points, 3.6 assists, 0.8 steals, 39% from the field, 40% from three.
Anderson’s minutes and results were all over the place, finishing on the negative end of the spectrum with a 2-12, 3 turnover performance in 27 minutes against Boston. KA was solid at times in limited minutes however, dropping 9 points in 12 minutes to start the week, and 11 points in 10 minutes to follow that up.

Justin Harper, Richmond / 25 minutes, 12.2 points, 4.8 rebounds, 34% from the field, 28% from three.
Harper started off strong with a 15-point, 6-9 performances against Brooklyn, but his shooter’s touch seemed to vanish after that hitting just 16 of his next 54 shots, including an abysmal 7-of-28 finish from long range. Harper even struggled at the free throw line, hitting just 50% of his 16 attempts.

Andrew Nicholson, St. Bonaventure / 26.2 minutes, 12.6 points, 6.8 rebounds, 47% from the field
The Magic’s first-round draft pick came out strong in Orlando, going for 24 and 12 in his first contest. He followed those performances up with 13 and 16-point performances, the later coming in just 16 minutes of play.

Dionte Christmas, Temple / 26.4 minutes, 12.2 points, 6.2 rebounds, 4 assists, 1.6 steals, 45% from the field, 28% from three.
Christmas was solid throughout OSL, scoring in double-digits in all five outings. The Temple grad finished strong as well, dropping 21 points in just 21 minutes in a blowout 21-point win against Orlando, and finished top five in both assists and steals.

Stephane Lasme, UMass / 9 minutes, 2.3 points, 1.7 rebounds, 0.7 blocks, 50% from the field.
Lasme was given a very limited amount of time to shine, getting action in just three games. Lasme was solid from the stripe (5-6) but had trouble holding on to the ball, turning it over six times in his 28 total minutes.

Mike Green, Butler / 8.4 minutes, 2 points, 1.6 rebounds, 1.6 assists, 27% from the field.
The Orlando Summer League wasn’t kind to guys from newly-added A-10 teams. Green was active in his limited action, but had a tough time hitting shots and holding on to the ball in his very limited minutes.

Lavoy Allen, Temple / 25.7 minutes, 6.7 points, 5 rebounds, 3 assists, 36% from the field.
It took a while for Allen to get into the action, sitting due to a coach’s decision the first two games. Allen was active, but not much help to the 76ers when he did get in, hitting just 36% of his shots from the field.

Chris Johnson, Dayton / 22.3 minutes, 7.3 points, 6 rebounds, 1.3 assists, 35% from the field, 29% from three.
Like most of the A-10 Summer Leagers, Johnson struggled to hit shots in his 22.3 minutes/4 games played. Johnson had a nice defensive game against Orlando however, grabbing 10 boards, 2 blocks and a steal to go with his 6 points, but didn’t do a ton to move the needle outside of that game.

Devon Searcy, Dayton / 21.8 minutes, 7.4 points, 7.6 rebounds, 0.8 blocks, 54% from the field
Searcy took some time to warm up scoring in single digits his first three games into OSL, but the Dayton product finished strong with back-to-back double doubles, all be it in losing performances for the 76ers.