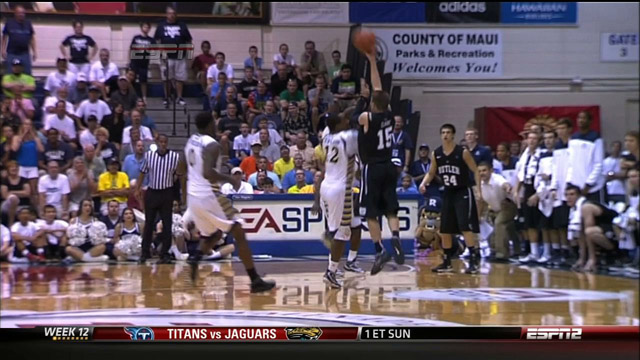 It’s early, but you’ve got to be impressed with the non-conference resume the Atlantic 10 is building right now.

Sure, there have been some early bumps on the road  — losses to the likes of Centeral Connecticut State, Canisius, North Dakota State and anyone on Forham or Rhode Island’s schedules — but consider the list heads mounted on the walls of the 2012-13 A-10 hunt club: Auburn, Boston College, Villanova, Marquette, Memphis, North Carolina, Notre Dame, Providence and Texas A&M to name a few. Not a bad bounty for November and there’s still a load of opportunities left for more wins like those.

It’s also a bit premature to start talking RPI, but with 10 teams currently ranked in the RPI top-100 (more than any other conference), the A-10 is certainly off to a nice start out of the gate.

The sledding appears to get somewhat easier this week as several teams return from brutal exempt tournaments in a number of tropical locations, but there are a handful of nice resume builders on the docket.

The action gets interesting Wednesday with 11 league members at work.

Saturday things get even more challenging.

Fordham kicks off the action with a tough road slate at an underrated Harvard program (probably the only time you’ll hear “underrated” and “Harvard” used in the same sentence). An hour later UMass hosts the ACC’s Miami Hurricanes while Rhode Island welcomes a 3-1 Vermont Catamounts squad. Just 15 minutes after those games tip, Xavier will look to pull off a road win against Matt Painter’s Purdue Boilermakers on the Big Ten Network. Shortly after that, the A-10’s preseason favorite, St. Joseph’s, will travel to the Missouri Valley’s preseason No.1, the Jays of No.11 Creighton. Richmond hosts an unpredictable Wake Forest club at 6PM. And the evening concludes with two under the radar matchups, as two undefeated Carolina squads, 4-0 East Carolina and 6-0 Charlotte, potentially look to stay undefeated in Charlotte, while VCU hosts the one good Bruins team in college basketball… the Belmont Bruins (5-1 with a road win at Stanford).

With four teams receiving votes this week (Butler, St. Joseph’s, Temple and VCU), A-10 teams will need to stack some more of these marquee wins while building on the leagues RPI as a whole. That means more of the Butler over UNC type action and less of the CCSU over La Salle type of letdowns that can torpedo a league.

Butler – A lot of A-10 fans might have VERY prematurely written off the Bulldogs as a league contender after their 62-47 drubbing at Xavier. The Bulldogs responded like a Brad Stevens coached team would, by first knocking off Marquette with a last second buzzer-beater in the first round of the Maui Invitational, a shot Roy Williams and the Tarheels wish had never gone in as Butler hammered the Tarheels 82-71 in the following round, leading by as many as 29 points in the second half. The Bulldogs eventually fell to Illinois in the Maui Invitational final, but not before reminding a national audience that Butler is a team to once again to be taken very seriously.

VCU – Usually a 1-2 week is a rough one, and make no mistake, Shaka Smart is probably less excited than we are about that trip, but VCU’s 1-2 showing in the stacked Battle 4 Atlantis earned the Rams some serious respect as a national contender. The Rams kicked off the tournament by controlling the No.19 Memphis Tigers (currently unranked), forcing 22 turnovers en route to a 13-point win. They followed that up by taking the No.5 Duke Blue Devils (currently No.2) to the edge, staying within six points despite not being able to turn Duke over (just eight turnovers) and shooting abysmal percentages from basically everywhere on the court — 33.3 fg%, 22.2% from three and 12-19 from the free throw line. “They’re really good, not good, really good,” Coach Mike Krzyzewski said about VCU. The Rams followed that with another hard fought, but ultimately disappointing loss to No.13 Missouri (currently No.16). VCU once again struggled on offense, but had the lead with just 1:32 left on the clock. VCU moved to .500 on the season, but in an impressive enough fashion to still pick up some top-25 votes.

Charlotte – The Niners didn’t exactly face murderers row, but you have to give credit to a team who is doing what they are supposed to do: win games you are supposed to win (not always as easy as it sounds). Picked to finish 12th in the A-10, Charlotte has jumped out to a 6-0 start, the most wins by any A-10 team currently, and almost half as many wins as they won all of last season. December sees a significantly large jump in competition for the 49ers with games against the likes of Davidson, Miami and Florida State, but after a confidence building start to the season, Charlotte should be better equipped for some upsets.

Both players shined for their teams and the A-10 against some of the toughest non-conference competition. Clarke averaged an impressive 21.3 points against Marquette, UNC and Illinois while hitting 42.4% of his threes in the tournament (and boy does he like to shoot the three…11 per game in Maui), including one of the top plays so far this hoops season with the desperation buzzer-beating winner over Marquette. Graham — who just recently turned 19 — averaged 18 points against three ranked teams while hitting 52.7% of his attempts on the weekend. Graham was expected to fill the shoes of the recently graduated Bradford Burgess. At 14.3 points and five rebounds per night (0.9 more points and the same amount of rebounds as Burgess averaged last season but in 5.3 less minutes/game), it may be safe to assume that Graham is more than capable of satisfying those expectations.