The 2014-15 college hoops season officially wraps this week in Indiana but already several A-10 teams have made moves to secure a brighter end to next season. 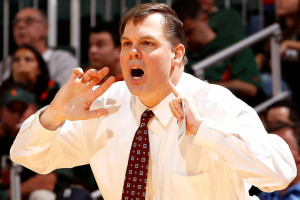 After five seasons and just 13 conference wins, the Fordham Rams handed Tom Pecora his walking papers and welcomed Eastern Kentucky’s Jeff Neubauer in as his replacement.

Neubauer spent the last ten seasons as head coach of the Colonels, leading EKU to two NCAA tournaments and five postseason appearances in Richmond, KY. He brings a style very similar to what Shaka Smart runs at VCU, rankings within the top-six nationally in turnover percentage defense over the past three seasons including second this past year en route to a first place finish in the Ohio Valley East. His teams have won at least 21 games the last three seasons and have finished no lower than second in the OVC East.

Neubauer last spent time in the Atlantic 10 from 1996-2002 as an assistant coach at the University of Richmond under then head coach, John Beilein. 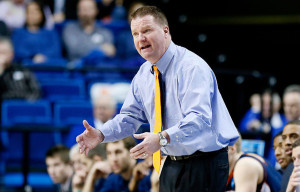 The Patriots of GMU recently fired Paul Hewitt after watching the program steadily decline under his control and have just replaced him with Bucknell’s Dave Paulsen.

Paulsen finished first in the Patriot League in four of his seven seasons, taking the Bison to two NCAA tournaments and two NITs during his time in Lewisburg.

Prior to that Paulsen led DIII Williams Ephs to two DIII title games including a national championship in 2003.

Two of the league’s hottest coaches have recently signed contract extensions through 2022. Rhode Island’s Dan Hurley and Dayton’s Archie Miller are two of the hottest names in the coaching carrousel but appear to be off the market, at least for this offseason, having both signed through 2022.

Hurley was reportedly a contender for the recently opened St. John’s job while Miller saw his name listed virtually everywhere else but both opted to return to their schools where they will likely contend for an Atlantic 10 title.

The Shaka Smart coaching drama has become an annual tradition for Ram fans, a virtual right of passage into the following season.

Since leading VCU to a Final 4 in 2011 Smart has seen his name attached to jobs at the likes of UCLA, Minnesota, Wake Forest, NC State, Illinois and Marquette to name a few. This year things get even scarier for Ram fans as the rootinest tootinest athletic department in all the land, Texas, appears ready for a duel.

CBS’ resident master click-baiter, Jon Rothstein, first reported Smart was in talks with the Longhorns to become their next coach. VCU’s AD, Ed McLaughlin, later told reporters no school has sought permission to speak with the king of havoc, a report later backed by Rothstein’s CBS compadre, Seth Davis.