Player of the Year in the Atlantic 10 is always a fun subject to talk about. There are so many factors to think about and discuss pertaining to this award. Who led the league in scoring? Who was the most important player on their respective team? Who dominated the league from start to finish? We could go on and on.

What we really need to look at is the pattern of past winners. For almost every individual award, there are usually a good amount of indicators that can inform people how a certain award is chosen every year, even if we as fans do not know what the official criteria is.

I looked at the past data and any patterns as to how our coaches, who are after all the voters, chose the Player of the Year Award. Let’s get to it.

Patterns of Past Winners

I wrote an article last season around this time, deep-diving into the common denominators of past winners of the award. You can access and read that article here

For each indicator, I am referencing the conference in its current 14 team format since 2014-15 when Davidson joined the conference.

In summary, there are 4 key patterns to look at for Player of the Year:

Note: The only winner outside of the top 5 in scoring was DeAndre Bembry, who was on the Saint Joseph’s team that was the only 4th place team to win the award. Seems to be the one outlier. 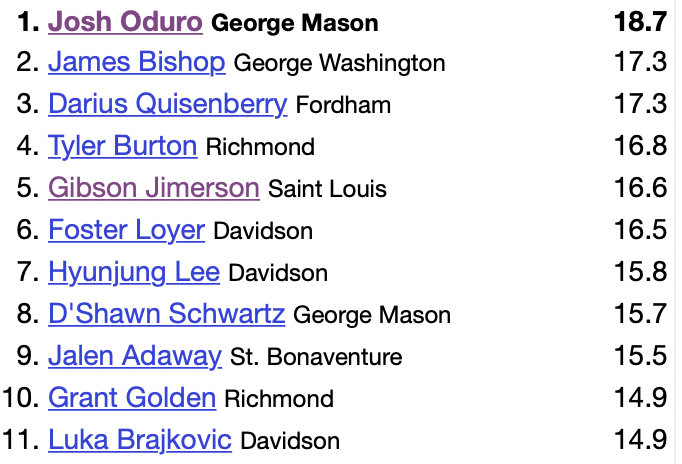 Luka Brajkovic is included at 11 since he is tied with Grant Golden in scoring.

Now, let’s look at the top half of the conference, which are the only 7 teams that have a chance to finish top 4 in conference 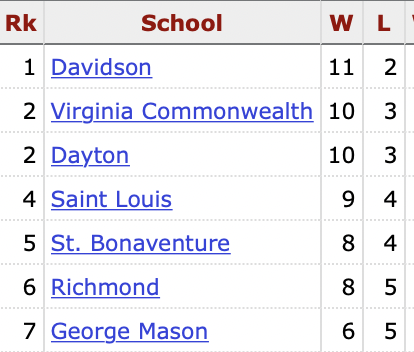 Now that we have those two lists, we can eliminate some players that won’t qualify from the 4 indicators that I previously mentioned: Eliminated players:

-James Bishop (team is not going to finish top 4)

-Darius Quisenberry (team is not going to finish top 4)

Looking at the remaining 9 players, all are on teams that could potentially get that top 4 spot. However, there are more than one player from certain teams. We can most likely eliminate a few more players that are down on the list. Eliminated players:

Now, I did leave a few Davison players on there just because Davidson has 3 key players that are so close in the PPG metric that one could surpass another in the coming weeks. We will get into that next by discussing the top candidates.

Davidson is the conference leader right now and has been the best team in the A10 overall. The three main players for them have been Foster Loyer, Hyunjung Lee, and Luka Brajkovic. Personally, I don’t see Brajkovic winning just because he is down on the list of PPG, and you don’t look at him and think he is the best player on his team. However, you can definitely debate that about Loyer and Lee. They are 6th and 7th on the list for PPG, so depending on who gets hot at the right time, and especially with a recent injury to Loyer in Davidson’s previous game vs Duquesne, Lee could win the award. They could also split votes from the coaches and get another player the award. That would be crazy.

Right now, both of these guys are top candidates because Davidson has a great chance to finish top 4 and they will most likely have one guy who finishes top 5 in scoring and two guys in top 10 in scoring.

Oduro has been the best player in the league who is not on a current top 4 team. He is no doubt the best player on George Mason, who is 0-3 without Oduro in conference play. He leads the entire league in scoring and does a little bit of everything on the floor. However, his team is not top 4 as of right now. They have a chance to make it, but the odds are slim, especially since they do not own the tiebreaker over Saint Louis. If Mason gets to the top 4 at the end of the season, Josh Oduro is the hands-down player of the year.

Probably the most NBA ready player in the A10, Burton is on a tear right now. He’s a freak athlete, bucket getter, and the best player on his team. He is almost averaging a double-double nightly. However, like Oduro, Burton is not on a current top 4 team. Richmond is sitting at 6th in the conference at 8-6, but owns a tiebreaker over St. Bonaventure who is a half-game ahead of them as of now. Another problem is that they don’t own the tiebreaker against Saint Louis or Davidson. Richmond’s top 4 hopes are almost gone at this point, but a miracle could put them at the 4 spot, which then Burton would have a decent case to win the award.

Jimerson is a sniper and shoots 40% from three. He can be a bucket getter when he wants to be. He also is 5th in the league in scoring. He also has 7 games this year scoring over 20 points. However, you don’t really look at Jimerson and think he is the best player on Saint Louis. Most of the A10 community agrees that Yuri Collins makes this team run and is Saint Louis’ best player. Jimerson is a benefactor of Collins, which is most-likely why he is top 5 in PPG. Saint Louis is sitting at 4th in the A10 right now, but does not own the tiebreaker against St. Bonaventure, who is right below them in 5th. Jimerson will get some consideration in the minds of the coaches, especially if Saint Louis finishes in the top 4, but not being the best player on his own team hinders him a bit.

Probably the biggest dark horse candidate for the award, Adaway is a big reason why the Bonnies are back in the top 4 race in the A10. I am including him because he has been the best player for the Bonnies’ resurgence in A10 play when they looked to be down and out a few weeks ago. He is currently 9th in scoring, where a few weeks ago he was not even top 10. He is shooting 41% from three and 51% from two. He has scored in double figures in his last 12 games. He does play a lot of minutes for Bona, which means he is going to have to score a lot for his team to win. Adaway may not be the shiniest horse in the barn, but he gets consideration since he is top 10 in scoring and St. Bonaventure is 5th in conference with owning a tiebreaker over Saint Louis. They could finish top 4, and Adaway could get a serious look for player of the year.

Is this the year a winner is chosen away from this criteria?

Of course. This is not a sure-fire way to pick a winner. Who knows what the coaches think or what they are told when they are voting for player of the year. The two best scorers in the conference right now are Josh Oduro and Tyler Burton, and their teams could easily finish outside the top 4 of the A10. If there is a season where the winner is from the outside of the top 4, this might be it.

Truly, I believe Josh Oduro is the best player in the Atlantic 10 this season, and he should definitely deserve the award. However, I have a hard time picking against history and data. As much as I love Oduro, it’s one of those things where I have to see it happen to believe it.

Therefore, I really think when it is all said and done, Foster Loyer is going to win. He is on a team that is almost certainly going to finish top 4, he is 6th in scoring and has a great shot to finish top 5, and, to me, he is the best player on his team. Loyer is also leading the A10 in 3pt% and is 4th in the country in free throw %. That just adds to his resume. In the end, I think history prevails and Foster Loyer will end up your 2022 A10 Player of the Year.