Duquesne’s an interesting bunch. Picked, almost unanimously, to finish last this year in conference previews, the Dukes clearly have a lot to prove. No one can deny that Akron’s Keith Dambrot was a great hire. That said, it’s going to take a year or two for the Dukes’ new head coach to bring the program to prominence.

Duquesne will bring in talent in transfers and freshmen next season; Dambrot’s made Duquesne such a hot spot in 2018-19 that he’s actually overcommitted for next season. I guess that’s not an awful problem to have. But what’s going to happen this year? Let’s take a look at some key questions heading into 2017-18.

1. Does an easy non-conference schedule build confidence and attendance? 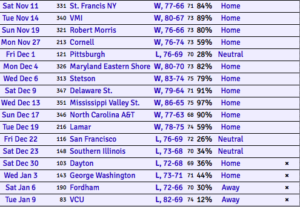 Dambrot and co. purposefully scheduled an easy non-conference slate, and it makes sense: build confidence in the program and get bodies back in the Palumbo Center. Success for this program won’t come easily, but you’ve gotta start somewhere, right? It’s good to see Dambrot getting some easy (hopefully) wins on the books.

Now, the question becomes, even if the Dukes are winning, do the students really want to show up to a non-conference game against Maryland Eastern Shore? If they skid in conference play, doesn’t attendance dip? That’s my biggest question. Essentially: Can Keith Dambrot be the catalyst to an exciting program?

We saw what he was capable of last year, leading the Dukes in scoring with 14.1 points per game as a freshman. Now a sophomore, the sky’s the limit.

I assume that Dambrot gives Lewis II the green light all year; who else is going to take the game-winning shot(s) this season? I guess my biggest question, at least in terms of Lewis II’s ceiling, is how much he’s able to make his teammates better?

Mike Lewis II was 2nd on the team in assists per game at 1.7 last season; Tarin Smith remains the team’s best distributor. But making your teammates better goes further than just setting them up with good passes. Lewis II has to be a vocal leader for a team that’s got a lot of new faces. It’s not often that a team with 3 scholarship seniors is looking to a sophomore to lead by example. But that’s what Mike Lewis II does. He’s the Dukes’ best player this year, by far, and if his teammates look to him as Duquesne’s leader, they might just follow suit. There are few players in the conference more important to their team than Lewis II.

It won’t be easy to finish outside the bottom 3, especially in a transition year. Look at Travis Ford at SLU; he came on the scene last year but was unable to take the Billikens any higher than 11th place. It’s going to take time, and Keith Dambrot needs to get a chance with his recruits. As difficult as it may be, you have to be patient as a Duquesne fan. Anything better than 14th place in the conference is a success in my book.

What’s it going to take? It’s going to take a talented backcourt exceeding expectations. Mike Lewis II, Tarin Smith, and Rene Castro are an underrated trio of guards. Jordan Robinson and Eric James bring experience and potential, and I really like Tydus Verhoeven as a sleeper freshman in the league.

Honestly, maybe it just takes a new coach to bring this team out of the 12-13-14 death penalty that it seems bound to. Look at last season, and you’ll see a lot of close contests lost by the Dukes, and quite a bit of that blame has to fall on the shoulders of Ferry. Now with Dambrot, he’ll have to close games. You have to close.