UD Arena was rocking on Friday night. The Flyers welcomed the Southern Methodist University Mustangs for their first “big test”, if you will, of the young season. Dayton had its highs and lows, including a late comeback to tie by SMU, but Dayton was able to go on a late 15-3 run to close out the game. Not to mention, the Flyers also covered an -11.5 point spread (many of us jumped out of our seats when that hit). They also wore the most beautiful Chapel Blue jerseys in sports. All was well that ended well in the Gem City. Dayton sits at 2-0.

Here’s my takes from the result:

Still without Malachi Smith, the big focus once again was toward Mike Sharavjamts to lead the Flyers as the starting point guard. Mongolian Mike did his job and was once again effective, scoring 10 points, 4 rebounds, and 1 assist. However, the team still has these long, dry spells on offense, and right now, at least, Mike is not the guy to get the Flyers out of those long scoring draughts. I think he will grow into that leader that can get his team out of those situations, but that guy last year was always Malachi Smith. Don’t get me wrong, Mike is awesome and is going to be a star on this team. But it’s only game #2 for him, and this was against a better opponent. Games against Lindenwood, Robert Morris, SE Louisiana, etc. Mike will be great. But against the better teams, Mike is still feeling out to how those teams are going to play him. He is still getting his feet wet against those better opponents. This is where the team really misses Mali Smith.

Why? It’s absolutely the 3-point shooting. The Flyers were 8-26 last night, good for 30.8%, which is better than on Monday night against Lindenwood (26.3% on 5-19). Brea is the best three point shooter on the team by a mile. By the team’s twitter account, it seemed like he was going to play tonight, as there were posts seen of him walking into the arena and warming up, dressed in his uniform. However, Brea did not see the floor. In fact, Anthony Grant only played 7 guys against SMU. However, the 7th guy off the bench was Zimi Nwokeji, who played only 5 minutes. We saw last year that if the Flyers go cold from three, teams will just let them shoot the three and pack the paint. That made for some difficult nights, especially early on in the season. Hopefully Brea comes back soon because the three point shooting is a bit of a problem out of the gate.

The Moose Got Loose

Mustapha Amzil. He might only have one or two big games each year, but boy are they some of the biggest performances of the season. Last year, it was the Finnish against Kansas in Orlando. This year, it’s 20 points off the bench, including 3-6 from three and one HUGE three-pointer with 2:12 left to put the Flyers up by 4 and then made all three free throws in a three-point shooting foul. This guy is so randomly clutch that you just never know when he is going to show up. Koby Brea is the 6th man of the year in the A10 and the first guy off the bench, but if Amzil becomes that 7th guy with Mongolian Mike being that other 8th guy (when Mali comes back), this team could have one of the deepest benches in college basketball. And that is still all without knowing what they get with Richard Amaefule and Zimi Nwokeji.

DaRon Holmes II Was Made For The Big Games

And then there’s DaRon Holmes. Last night, the Flyers next big super star put up 20 points. He also contributed 7 rebounds, 5 blocks, and 3 assists. This guy was made for the big opponents and the biggest games. SMU knew that the game plan was to get DaRon the ball, and they still couldn’t stop him. That’s how you know you have a super star. DaRon is going to fly up the NBA draft boards with more performances like this, but first, he’s going to be a huge part as to why the Dayton Flyers have a chance to be a special team. 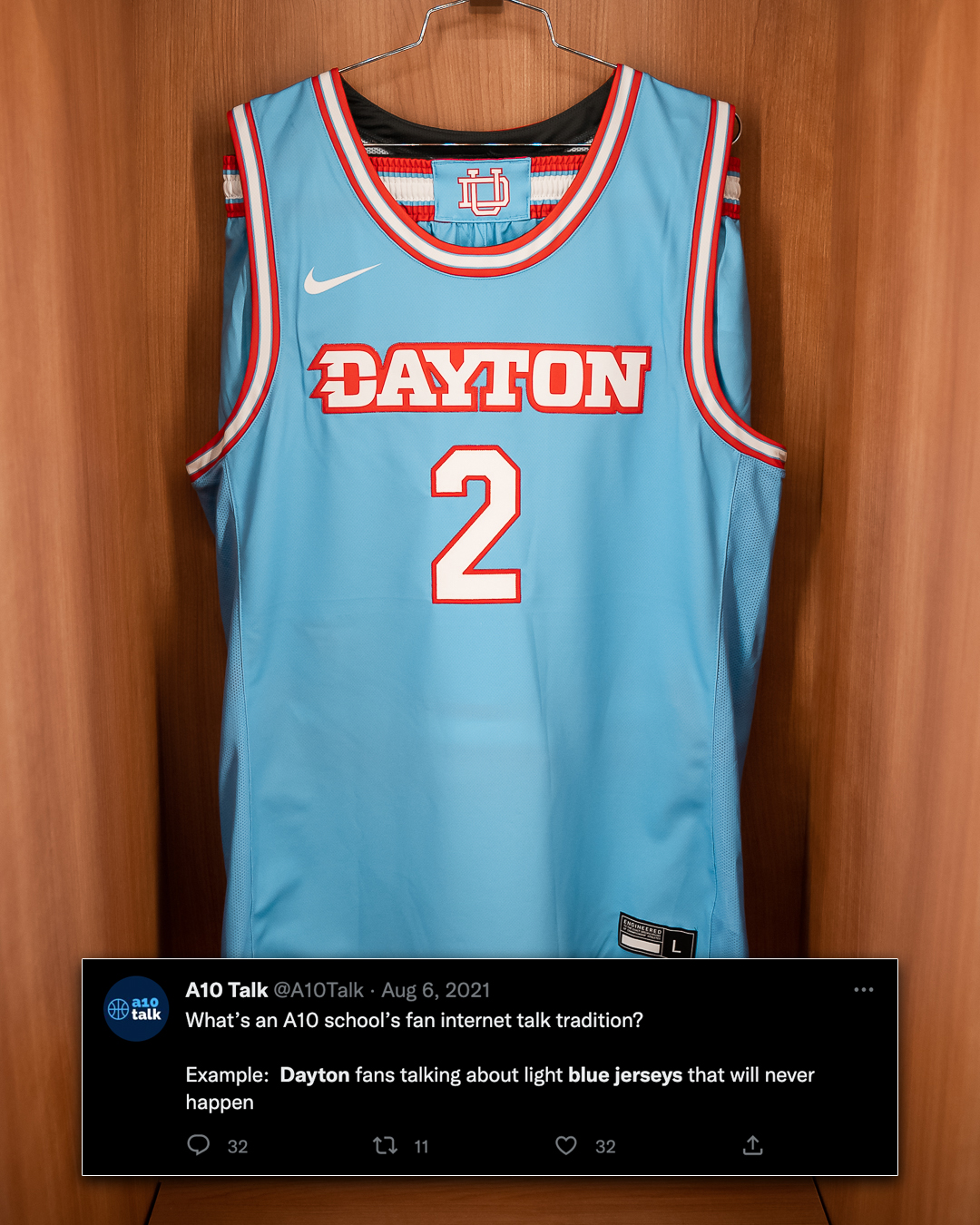 I got trolled by the Dayton Basketball twitter account from a tweet I made over a year ago saying the baby blues would never come back. I applaud them for that as it takes great dedication to keep a receipt from over a year ago. I died when I saw that in their tweet. And I didn’t care. These uniforms absolutely rule. I spend over $130 on Chapel Blue gear at the gift shop last night. I don’t care. It’s the best color combination in college basketball right now. Dayton would be silly to go back to the navy blue. Just add the chapel blue as another color. It would be amazing. I BET IT WOULD NEVER HAPPEN.

I mean….just look at them. I can’t stop.

A wise man once said, “It’s like the first time I heard the Beetles.”

What the Result Means and What’s Next

This is a nice win over SMU, who is probably a little better than their #110 ranking on KenPom and #7 ranking in the AAC preseason poll. We really won’t know until the NET Ranking comes out in December, but I would say this is around a Quad 2 win for Dayton, which will do.

Next, Dayton will travel to Las Vegas to take on UNLV in a true road game, their first of only two true road games in the non-conference slate. UNLV is currently #119 on KenPom and was picked to finish 6th in the Mountain West preseason poll. UNLV is currently 1-0 and hosts Incarnate Word at home on Saturday before their host the Flyers on Tuesday.