Menu
Log in
Register
Install the app
You are using an out of date browser. It may not display this or other websites correctly.
You should upgrade or use an alternative browser.
For the first time in far too long, the Atlantic 10 is back on the up and up again! (Hopefully) gone are the days of being a one-bid league, as the A-10 hopes to put at least two A-10 teams back into the NCAA Tournament for the first time since 2018 when George Washington and Dayton both danced. Top to bottom, this is the most talented, athletic, and most fun that this league has been in quite some time! The regular season title came down to the final day of the regular season, and in total, 13 of the 14 teams in the league entered the final day of the regular season having yet to clinch their seed in the A-1o Tournament, which just speaks to the level of parity and competition we have seen this season. This year kicks off the first year of the A-10 contract with CHASE Fieldhouse in Wilmington, DE to be the long-term home of the Women’s Atlantic 10 Tournament! Who will be crowned as the first champion in the new home of the tournament? Show me the contestants!

Predictions time! What’s March without filling out a bracket and getting absolutely none of it right?! I had to pick a few upsets, because you know there always are plenty! At any rate, this is what I’m rolling with: 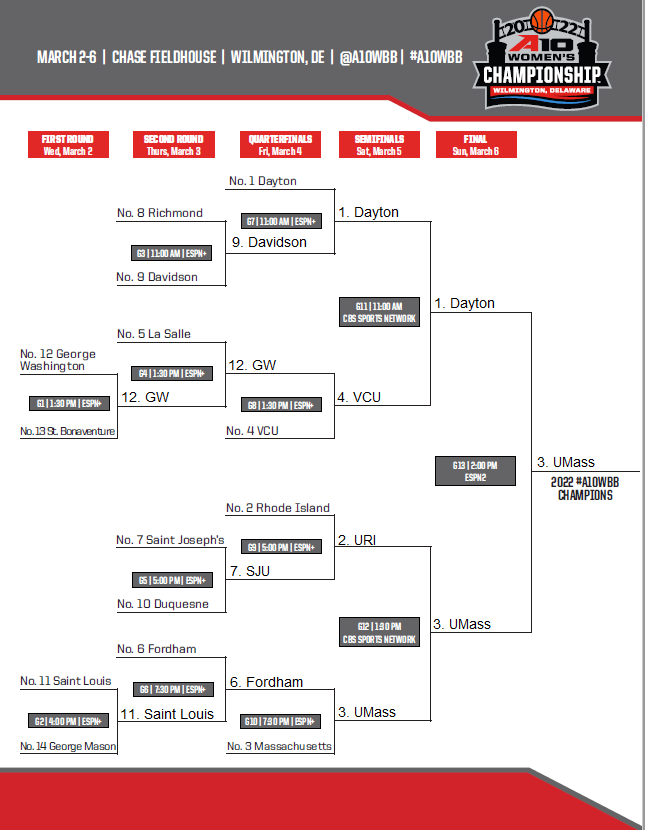