Menu
Log in
Register
Install the app
You are using an out of date browser. It may not display this or other websites correctly.
You should upgrade or use an alternative browser.
It’s finally that time of year again, and this year’s Women’s A-10 Tournament is shaping up to be a good one!

#1 Dayton
Overall record: 13-2
Conference record: 12-1
Dayton is the undisputed favorite heading into the 2021 Atlantic 10 Tournament. The Flyers have won the A-10 regular season for the second straight year, and the fourth time in five years. While they dropped an early non-conference game to Akron, Dayton responded by winning 11 straight games. Their lone loss in conference play was at home to Saint Louis, a team they won’t have to face again until the A-10 Finals, assuming SLU makes it that far. The Flyers are led by Erin Whalen, who is 11th in the conference in scoring, averaging 13.7 points per game, along with senior Jenna Giacone who adds 12.9 points per game. Dayton also has potential Rookie of the Year in Tenin Magassa, who averages 9.0 points, 6.9 rebounds and 2.5 blocks per game.
Dayton is currently projected to be a 13-seed in most bracketology out there, and it’s doubtful that the needle will move for them too far up or down. That said, the A-10 is almost certainly a one-bid league once again this year, so if the Flyers hope to dance this year, their only path is to win it all.
#2 Fordham
Overall record: 12-3
Conference record: 8-2
At the time that Fordham was forced to pause all basketball activity despite never producing a positive covid test (you can read more about their story here), the Rams were arguably the hottest team in the league. They had won four straight before their pause, and were still in contention to win the A-10 regular season. But the pause changed all that, and so here Fordham sits as the 2-seed. Still, not too shabby. The Rams have played just one game since February 12, and that was a March 4 “non-conference” game at George Washington, which Fordham won 48-43. I know it might now sound like much, but getting a win in your first game back from a covid pause has proved time and time again to be nearly impossible, especially in the Atlantic 10.
The Rams are led by potential A-10 Player of the Year Anna DeWolfe, who is arguably one of the most fun guards to watch in all of college basketball. She led the conference in scoring 21.5 points per game, and has consistently played at her best when her team has needed her the most.
Her wing-woman is Kaitlin Downey, the walking double-double machine, who is averaging 10.0 points and 10.5 rebounds a game this year. My only concern with this Fordham team is the time they have had off recently. They have a tough opening game, facing the winner of #7 UMass and #10 Saint Joseph’s. If the Rams can get through to the A-10 Semifinals and Finals, I wouldn’t want to be the team having to face them.
#3 Saint Louis
Overall record: 11-3
Conference record: 9-3
Unfortunately, the Saint Louis women’s basketball team has been just as affected by covid pauses as their men have been. After two huge wins to start the season, including one over Memphis, the Billikens didn’t get to play a game for a month and a half. Their first game back was a loss to a very hungry Fordham team, and then SLU split a pair of games with then-first place UMass. From that point on, their only loss was in overtime against Dayton, which there’s certainly no shame in. Especially when you consider the fact that the second time those two teams met, the Billikens handed Dayton their only loss in conference play.
Overall, Saint Louis has won 9 of their last 10 games, and 7 in a row heading into the A-10 Tournament. They’ve been a bit of a hard team to judge and figure out, just based on how choppy their season was with games getting canceled left and right. But you also can only beat the teams you have in front of you, so no fault to SLU. A potential Fordham-Saint Louis semifinal would be a heavyweight battle for the ages, and a potential rubber match between Dayton and Saint Louis in the finals would be must see television.
#4 Rhode Island
Overall record: 11-7
Conference record: 11-4
By far the biggest surprise of this season was Rhode Island. Picked to finish 11th preseason, URI overcame just about every obstacle thrown at them this season to put together one of their best years in recent memory. Emmanuelle Tahane has had a breakout year, leading Rhody is scoring at 15.1 points per game, good for 6th best in the entire conference. Not too far behind is Marie-Paule Foppossi who averages 13.7 per game. The Rams really seemed to find their stride late in the season, winning their final 3 games by an average of 18.3 points, including two key wins over VCU and Richmond to lock up the final double-bye. Don’t be surprised if URI gives Dayton some fits in the A-10 Semifinals, should they meet there.
#5 VCU
Overall record: 12-10
Conference record: 10-5
A bit of a disappointing season for the Rams, as they were the preseason favorite to win the Atlantic 10. VCU certainly compiled one of the toughest non-conference slates in the nation, scheduling the likes of Saint Mary’s, Arizona State, Stephen F. Austin, Buffalo, ECU and Vanderbilt. VCU’s downfall this season has been a painful lack of consistency. They needed overtime to defeat a winless George Mason team in late January and generally seemed to struggle against the bottom of the conference, while performing decently against the top half of the league. Their opening game will be against either Davidson or St. Bonaventure, of whom the Rams have played a combined one time. VCU defeated the Bonnies 69-67 back on January 10, and has yet to face Davidson this season. If I had to pick one team to potentially be upset in their opening game, it might just be VCU. That said, I wouldn’t count out the Rams entirely, especially considering the entire tournament is going to be played on their home floor…

Predictions time! What’s March without filling out a bracket and getting absolutely none of it right?! I had to pick a few upsets, because you know there always are plenty! At any rate, this is what I’m rolling with: 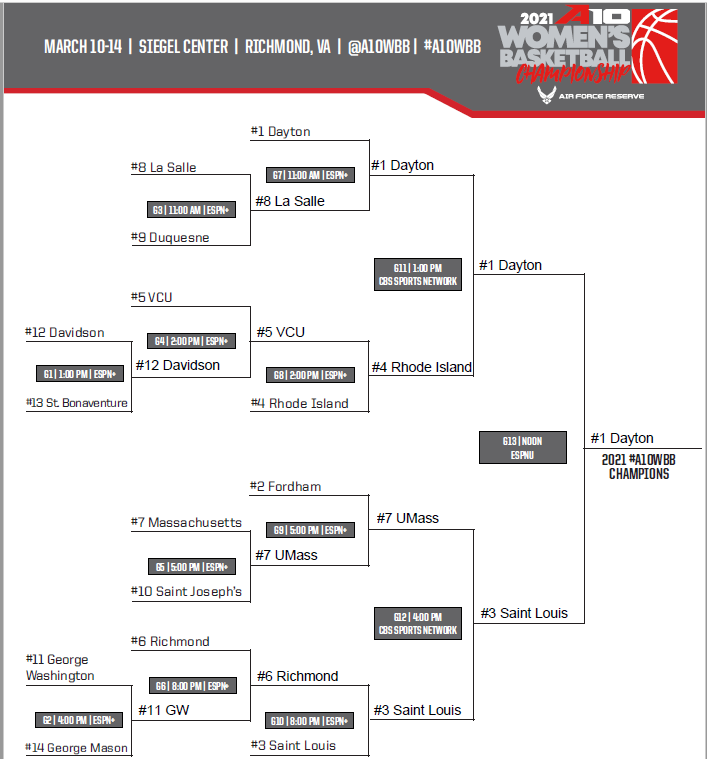