It was a crazy awesome week here in Pittsburgh full of upsets, clutch performances, and downright high-level basketball. Here’s how it all went down, as told through the tweets of A10Talk and Atlantic 10 fans everywhere.

We arrived in beautiful PGH to get our first glimpse of the host venue, PPG Paints Arena!

First look at PPG Paints Arena. Looks like it’s gonna be one heck of a host for this year’s tournament. pic.twitter.com/jPQMPvVejX

Mike Lewis II with the up and under circus shot for @DuqMBB, he’s got 18 points on the day. Tune in for the finish @LiveOnAsn! pic.twitter.com/MvqBsQWH7K

but the Dukes fans didn’t seem too excited about the future. 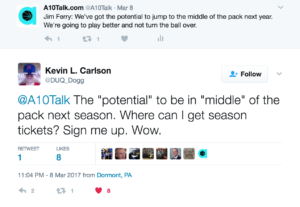 We feel like you’re going to set off the metal detector with that trophy, sir. #A10MBB pic.twitter.com/THtBi8Ec9W

This Davidson fan is ANIMATED. It’s early ladies and gentlemen. If you think you’re a fan, you need to get on his level. Dude’s feein it. pic.twitter.com/kRF7EVfXdy

Aldridge with the slam! pic.twitter.com/JHaHxMS31N

Bona was as hype as ever…

Can you count the cans?? pic.twitter.com/jFC45sHFzZ

and major news broke about a leadership change within UMass.

BREAKING: UMass has fired Derek Kellogg, per a source.

Meanwhile, GMU sent their game to OT on this sweet dish…

JENKINS AT THE BUZZER. OVERTIME!!!! pic.twitter.com/qErJrQVOxb

…and Yuta Watanabe capped off a GW come from behind win.

Plus, made it on TV!

The Flyer Faithful showed out big,

but Jack Gibbs showed out even bigger!

OH MY GOD THIS KID pic.twitter.com/oMTmONqCqQ

Gibbs on breaking Aldridge’s arena points record set yesterday: “I couldn’t let him have that for too long”

The senior enjoyed his last A-10 tourney…

…as VCU rolled to victory.

Doug Brooks walking right in front of the Mason cheerleaders to get the VCU fans pumped up. Love it 😂pic.twitter.com/NpoPJLXXuq

JeQuan also had some fun after the game!

Rhody was ready out of the gates…

Davidson and their fans prepped to take on Rhode Island…

A-10 fans, GET ON THIS WOMAN’S LEVEL. She is doing the warmups with the Davidson team as they run the court. If that’s not fandom, what is? pic.twitter.com/QJPuvdUzUt

but the Rams were RED-HOT from deep.

8-of-11 from beyond the arc… that’s pretty good, right? pic.twitter.com/ndKMgiZlDf

How about this pass from @JaredTerrell32 to @HassTheGreat who absolutely punishes the rim. Rams trying to stay in control. pic.twitter.com/poJ7ek9E7Q

We said goodbye to an A-10 legend,

What a career by @JackGibbs_12 at Davidson. Was tons of fun to watch these last 4 years. Going to be remembered by the Cats for a long time. pic.twitter.com/EBfvg9j3kn

“I know I might never wear Davidson on my chest again, but I know it’ll be in my heart forever” – @JackGibbs_12

and said hello to a star in the making.

Richmond almost had this game…

but VCU closed it out in OT.

For the seventh straight year, we will play for a conference title. See you tomorrow. #LetsGoVCU

Hats off @tjcline6 for one heck of a career in the @atlantic10. We’re going to miss watching you play. Incredible season. Incredible player. pic.twitter.com/RnTOHXscUK

The final game tipped off on Selection Sunday…

…and Rhode Island was playing no games.

Rhode Island has been SCORCHING the nets here in Pittsburgh. pic.twitter.com/IS9EDEEbny

Neither was Hassan Martin!

After a hard-fought battle, Rhody came out on top!

Rhode Island wins the A-10 tournament and punches its ticket to the Big Dance. Congrats Rams!

CRAZY CRAZY GAME! Don’t think we could’ve asked for a much better A-10 Tournament. The best part? 3 A-10 teams are going dancing this year.

Coach Hurley took in the moment.

And the best part, we’re not done yet!!

Here’s to another couple weeks of A-10 basketball! Next stop, Phoenix, for the Final Four!